Peanut Butter and Chaos: The Mythic Adventures of Samuel Templeton 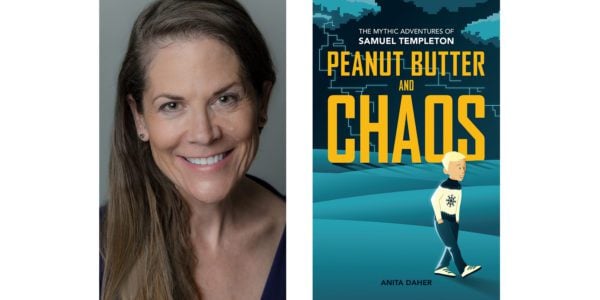 Sam Templeton has been brought up by his distracted former-scientist father to apply the scientific method to any problem, so when he feels his father doesn’t see him anymore, he poses the question: Am I invisible? After careful observation and data collection, he concludes that yes, he is. Happily, that doesn’t last long. His father is forced to pay attention when Sam is struck by blue lightning and jerked into an altered state of being. Sam now sees the world in shifting pixel-like cubes, and his strange new vision enables him to perceive the displaced but charming Flum, a non-binary being from an alternate reality who slipped into this reality via the same lightning strike that hit Sam. Oddly, this blue lightning also coincided with the disappearance of Thyla, Sam’s too-perfect neighbour who no one else seems to remember.

After many tests at the hospital, Sam is assured that his visual impairment will wear off. For Sam, it’s a race against time to figure out how to get Flum back to their  own world and discover what happened to Thyla. If only his father would quit tripping over his own feet and getting arrested for assaulting police officers, Sam could concentrate on figuring out the science behind alternate realities and the extraordinary power he now has to rearrange matter. Oh – and somehow, it’s all tied up with his mother, Dory, who disappeared when Sam was two years old.

Peanut Butter and Chaos is an amusing, fast-paced adventure with broad appeal for young readers. Since most of Sam’s wild experiences are grounded in science, curious middle-graders may speculate about what is actually possible within the bounds of quantum physics. Sam is a blundering but likeable hero, and Flum could easily be E.T.’s lovable younger sibling. Together, they confront baby skunks and RCMP officers and make a daring jailbreak by walking through walls. Many of the adventures are punctuated by new and alarming ways to eat peanut butter.

At times, the book suffers from stretching science and probability just a little too far (literally: the tunnel Sam and Flum dig must be half a mile long), and the detailed scientific explanations get a little tedious. But the book is ultimately whimsical, fun and a very good start to what could be a satisfying and successful series. Underlying it all is a mysterious Icelandic mythology and a hovering villain that are bound to play larger parts in subsequent books.