by Roy Miki and Slavia Miki and Mariko Ando (ill.) 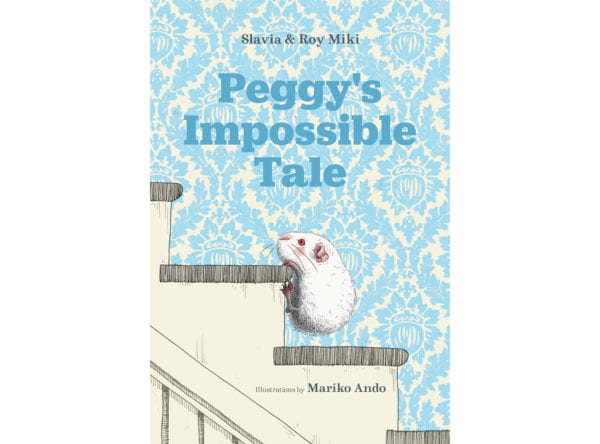 Peggy’s Impossible Tale by husband-and-wife duo Roy Miki and Slavia Miki is based on the “exceptionally special” guinea pig their daughter, Elisse, had as a child.

Guinea pig Peggy is a curious creature and so is this book. It follows Peggy from the pet store, where she has rather unkind words to say about her fellow animals, to her new home, where she is content. Peggy becomes the playmate and confidante of her new owner, a young girl from Vancouver named Lisa.

The story unfolds in a non-linear progression; Peggy unceremoniously achieves the impossible less than halfway through the book and again, with fanfare, at the end. Sprinkled in between Peggy’s pursuit of the impossible are atemporal vignettes. These are the moments when the book shines and Peggy comes to life.

Peggy does just about everything that children do – she dances, plays hide-and-seek, and picnics with Lisa. Peggy also experiences relatable feelings: loneliness when Lisa is at school, fear when she hears a vacuum cleaner, and pain when she zaps herself in an electrical outlet.

Peggy’s adventures are charmingly depicted in Mariko Ando’s illustrations. To show that Peggy is (almost) scared to death by a cat, Ando draws her frozen in midair with her mouth agape and an X for an eye. Ando’s drawing of Peggy after her electrocution is so anthropomorphizing that the reader can practically hear Peggy panting as she recovers. These scarier episodes sit comfortably alongside joyful pictures of her dancing on a stool and cuddling under blankets. Ando’s illustrations, and the book as a whole, are sincere, comedic, and evocative.