Persephone’s Children: A Life in Fragments 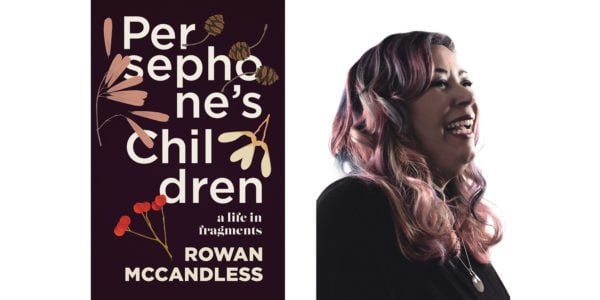 Winnipeg author Rowan McCandless’s glowing debut, Persephone’s Children, pushes the boundaries of memoir and personal essay. The discovery of voice and identity and the process of healing after an abusive relationship are central to this story. As a Black and biracial woman, McCandless writes with searing emotional detail about the profound impact of family, ancestry, and history, creating a fragmented yet ultimately complete self-portrait.

The trauma from emotional abuse is a running theme throughout the book: both of McCandless’s parents forced her to keep secrets from the other and her abusive partner invented rules for McCandless to heed for the duration of their long-term relationship. She uses novel storytelling strategies to relay the extent of her abuse, her reflection on it, and her eventual escape from it. Near the book’s beginning, McCandless presents her abuser’s rules in “Binding Resolutions,” a chapter that reads like a legal contract. Elsewhere, she writes a multi-story screenplay to explore the complications and pitfalls of constructing and manipulating narratives.

Other unconventional compositions include a stream-of-consciousness poem, a crossword puzzle, and interrogative writing prompts. The use of these forms creates different lenses through which to view a person’s life story, to draw out questions and connections from seemingly one-dimensional narratives. Experimental hybrid storytelling is at the very heart of Persephone’s Children, and it is one of the book’s significant accomplishments.

McCandless’s writing is particularly impactful owing to its use of different points of view. Much of the book is written in the second person, which draws the reader into her world and perspective. She also writes about herself in the third person, as in the chapter titled “Vocal Lessons: A Diagnostic Report,” to examine her own behaviours and mindsets at a remove. McCandless uses the first-person “I” to explore and discuss mythology, home, and her future.

Using creative writing to heal from trauma is a common methodology, but its truth shines through in this book. Writing, for McCandless, was a way to slowly regain the voice that was silenced when storytelling had been turned against her by others. As she untwines herself from her abuser, McCandless keeps a notebook, takes writing classes, and writes about her own life. She connects with a community of writers who provide her with strength and confidence, and who eventually support her during her moves to different houses.

Sections of Persephone’s Children are dedicated to the homes and houses that McCandless lived in over the years. In recounting the nature of these places, she traces her needs and wants, what she wishes to discard or keep. Significantly, her house on Coralberry Avenue, where she lived with her abuser, was home to a strong and robust garden, “a place of healing that teemed with life.”

Throughout McCandless’s experience of abuse, the ways that homes, communities, and relationships are created, cherished, challenged, and negotiated pull the book together in complicated layers. The result is a candid and deeply moving literary “life in fragments.”