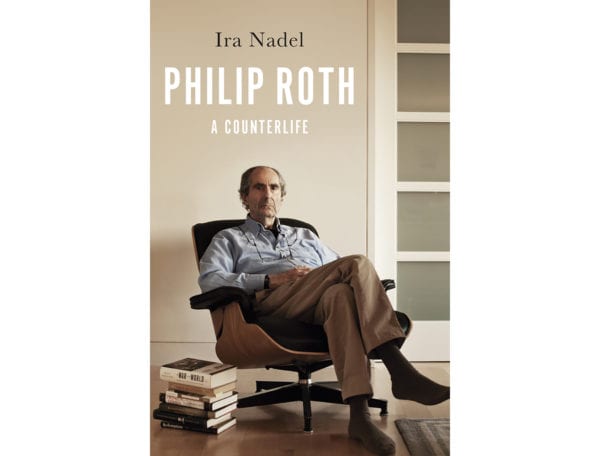 “That’s one of the biggest things that America gave to the Jews – gave them their anger,” says Murray Ringold in Philip Roth’s 1998 novel I Married a Communist. “America was paradise for angry Jews.” University of British Columbia professor of English Ira Nadel quotes this passage in his new biography of Roth as a means of illustrating one of his central theses: in both his life and his writing, Roth was driven by a sense of righteous anger.

Anyone with even a passing familiarity with Roth will understand the centrality of anger – often prompted by an impulse toward revenge for a real or perceived wrong – in the author’s fiction, though the other half of the equation is equally germane: the paradise Murray Ringold located was specifically American, and Roth’s work is inseparable from his nationality. Swede Levov’s “longed-for American pastoral” (in the novel of the same name) and “everything that is its antithesis and its enemy” is a subject Roth returned to over the course of his long and storied career; it is one of three pervasive concerns in the author’s fiction, alongside sex and – unavoidably – Philip Roth himself.

“Perhaps no term is more loaded in analyzing Roth than ‘narcissism,’ exacerbated by his anger at betrayal,” Nadel writes astutely. Although Roth was undeniably self-absorbed, the charge – one that dogged him throughout his career and even after his death in 2018 – that his novels’ only subject was himself amounts to a facile reading. Roth was adamant that his life and personal history were springboards for invention and not to be taken as direct reportage. While it is easy to argue that this was the author’s disingenuous attempt to provide himself plausible deniability, it is equally apparent that his fictional apparatus – the doubling motifs in Deception and Operation Shylock; the layers of aesthetic distance afforded him by his alter egos Nathan Zuckerman and David Kepesh – are more than ornaments: they are inextricable elements of novels filtered through the prism of an artistic sensibility unlike any other in 20th- or 21st-century American letters.

Given Roth’s insistence on the distinction between his life and his fiction, it seems passing strange that Nadel frequently assumes a one-to-one correlation between the work and the author. Often he quotes Nathan Zuckerman and suggests that the character’s words or philosophy belong to Roth unconditionally. The irony here is evident when Nadel does acknowledge the deliberately murky distinctions between subject and object in Roth’s work: “Zuckerman realizes that his public had ‘mistaken impersonation for confession and were calling out to a character who lived in a book.’”

Nadel provides a comprehensive overview of his subject’s life – the facts, so to speak – including his childhood in the New Jersey suburb of Newark; his brief stint in the army, which ended with an honourable discharge after Roth suffered a back injury; his two disastrous marriages; the explosive controversy surrounding the sexually explicit and putatively anti-Semitic content of his fourth novel, Portnoy’s Complaint; his travels to eastern Europe in the 1970s, which led to his promotion of exiled or dissident writers such as Milan Kundera and Ludvík Vaculík.

Philip Roth: A Counterlife is at its best in dissecting the author’s relationships with his various publishers; he frequently inserted himself into the production process, commenting on everything from cover design to marketing. A notorious perfectionist, Roth was also known for not being shy in pointing out where he felt writers or critics had misconstrued or treated him badly. Nadel recounts that when Roth complained to Wikipedia about errors regarding the inspiration for the Coleman Silk character in The Human Stain, its administrators informed him, presumably without irony, that “he was only the author and therefore not a credible source.”

Unfortunately, the book is also riddled with repetition and factual errors. Addressing Roth’s penchant for changing publishers, Nadel writes that Roth’s final four novels, incorrectly identified as beginning with Everyman in 2006, “saw him go back where he started: Houghton Mifflin.” Roth returned to HMH with Sabbath’s Theater in 1995 and never left again. At another point, Nadel wrongly refers to an assertion made by “Zuckerman’s father” in Everyman; Zuckerman doesn’t appear in that novel.

Nadel’s book is coeval with Blake Bailey’s authorized biography of Roth, which was put out of print shortly after publication amid sexual assault allegations against its author. There is the sense that Nadel is trying to shore up his material as more trustworthy because of a lack of the subject’s interference. Referring to materials Roth provided for Bailey, Nadel remarks, “Roth was directing and even writing his biography, establishing credibility for its ‘authorized’ status.” This pre-emptive critique may have to do with the fact that in 2011, Roth spent $60,000 to challenge an earlier critical monograph by Nadel; according to The New Republic, when Roth discovered Nadel was working on a biography, “he had his agent tell Nadel that he would not have permission to quote from his works.” On this point, at least, Nadel gets it absolutely right: Roth never forgot or forgave a slight. His anger was his muse.