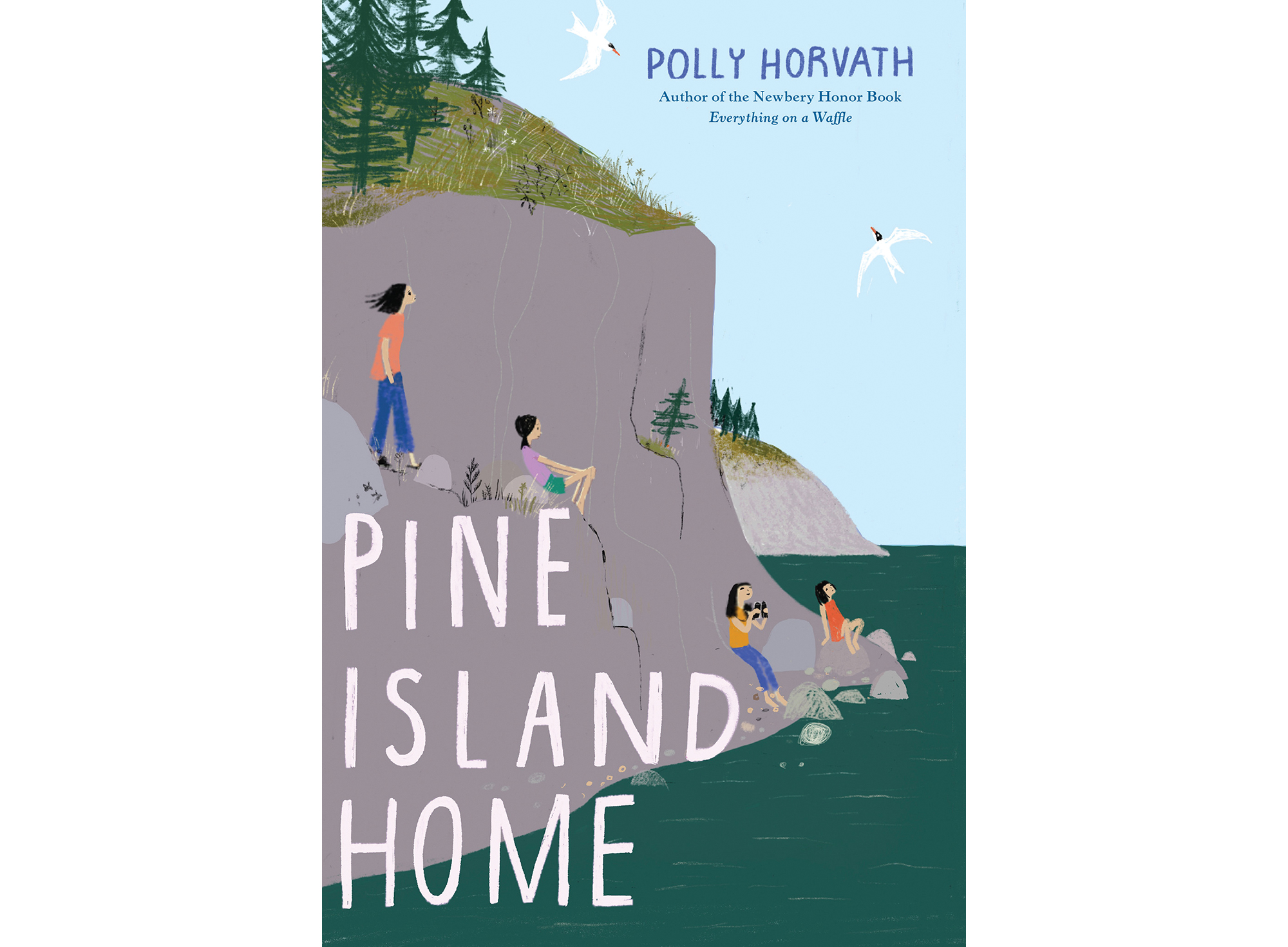 Orphaned children and crotchety neighbours have long been popular fodder for children’s stories. In Pine Island Home, Polly Horvath brings these two elements together in a novel that is surprisingly fun and light (considering the protagonists’ parents are swept away in a tsunami) and peculiarly appealing (due to the unexpected and comical portrait of a mean drunk anti-hero).

After their parents’ deaths, Fiona, Marlin, Natasha, and Charlie (sisters ranging in age from 14 to 8) travel from their home in Borneo to a small town in B.C. They’re expecting to move in with their new guardian, an eccentric great-aunt, but she dies while they’re en route. In order to continue living together on their late relative’s picturesque nature-filled property and under the radar of social services (they’re sure they’ll be separated), they approach the closest adult in proximity – “a large man with a mop of untidy white hair, wearing a dirty white tank top and ripped pants.” The unsightly stranger, Al Farber, lives next door in “a filthy trailer with its open cans of baked beans.”

Fiona lays out their situation and asks if he’ll pretend to be their guardian when any official paperwork, phone calls, or visits come up. In return, they’ll pay him beer money and cook him dinner each night. Unable to resist the idea of a homemade pork chop, Al reluctantly agrees but not before insulting the sisters, swearing at them, and letting them know that he hates kids, a.k.a. “horrible jam-handed sticky things.”

Since Al is not exactly guardian material, the girls keep their eyes peeled for a longer-term solution, hoping that someone like their young, pretty, street-wise school principal, Miss Webster – who has already found out their secret but promised to keep it – will eventually adopt them. The contrast between the neighbour and the principal – and how they come to provide for and disappoint the children – lends a perfect amount of tension throughout the book.

Horvath’s novels often offer a masterclass in smooth and engaging prose. In the opening of Pine Island Home, she deals with the difficult subject of the parents’ deaths and the girls’ dire situation by using short, direct sentences, as if it’s painful even to put pen to paper. But the writing opens up once the girls find some semblance of happiness in B.C. There, the sisters take care of one another, and enjoy the new experiences in nature and with other children they meet at school. Killed off-stage on the first page, the parents are never a presence in the book or the girls’ lives. All they seem to have impressed upon their daughters is a handful of clichéd homemaking sayings that Fiona regurgitates in her new role as head of the family.

The story is set in the present day, but like many of Horvath’s novels, there’s an old-fashioned aspect to the lives of these young characters: they work hard, eschew most technology, cite Audrey Hepburn as a fashion influence, yearn for music lessons and dolls, and get lost following birds.

Horvath is not going for gritty and realistic, nor does she dwell in the kids’ pain and trauma. Rather, she foregrounds their adventures and relationships, which are sweet and entertaining. Every scene with the belligerent Al is over the top (in a good way) or arrestingly tender. He was once a respectable New York Times reporter who came to Pine Island years ago to write a story about the girls’ great-aunt, a world-class fisher. Finding out how he got to be so ornery, and how his life is changed by the arrival of these four sisters, is unsentimental and satisfying. Horvath is on to something here: turns out, orphans and bad neighbours go together like pork chops and baked beans.