Praying to the West: How Muslims Shaped the Americas 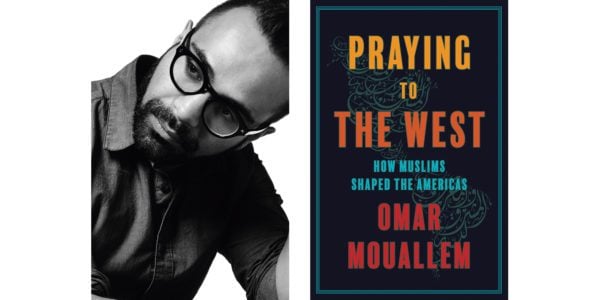 Writer, journalist, and filmmaker Omar Mouallem’s Praying to the West: How Muslims Shaped the Americas is a fascinating exploration of the many manifestations of Islam across cultures, traditions, communities, and political lines. Mouallem’s journey takes him across the Americas, visiting 13 mosques from Inuvik to Houston to Brazil, including la grande mosquée de Québec. Mouallem’s search takes an intersectional approach to faith, and he draws from personal experience (both his own and his hosts’) to pose difficult and profound questions that don’t have simple answers. Grappling with his own relationship to Islam throughout his reflections and journeys, Mouallem is unafraid to voice doubt: “Can one be Muslim if he doesn’t believe in its basic tenets but seeks comfort in Islam’s select messages and practices? If the airport security and most people assume I’m Muslim, including my own family, does it matter? In other words: Am I still Muslim?”

It is in these penetrating questions – and the honesty and vulnerability they reveal – that Mouallem demonstrates why he is an award-winning writer. Leaning into the discomfort of holding more than one space at one time, Mouallem deepens his investigation of faith to reflect its complexity – from the model minority myth and its impact on other communities of colour to the orientalist and inaccurate representations of Muslims onscreen.

Mouallem also speaks to the anti-Blackness within the ummah – the larger Muslim body – and the history of Islam, willing to pierce through his own privilege to grow into deeper understanding: “From 650 to 1600, Arab slavers bought and sold 7 million Africans, mostly women, and continued trading well into the twentieth century. Some Libyans are trading sub-Saharan Africans right now. That ab’d, the Arabic equivalent of ‘negro,’ translates to ‘slave’ proves how interwoven these ideas are still in my culture.

“How I wish I had known that ab’d was a slur when my younger self used it in conversations with my relatives.”

Mouallem is masterful in his ability to both embrace what he loves and interrogate the faith he was born into. It takes a gift of discernment to define and redefine what it means to be a Muslim without romanticizing its problems or giving Islamophobes more fodder. Mouallem walks this thin line with grace and candour: “Despite lacking Islam’s most rudimentary beliefs, I’ve become protective of my religious roots and feel rebellious when I declare myself Muslim in the face of bigots and zealots. Whether you choose to wear your identity, it sometimes wears you and often wears you down.”

In Praying to the West, Mouallem consciously and courageously resists a monolithic approach to a faith tradition that is too often relegated to headlines and media stereotypes in the Americas. It’s a refreshing read that shines light on the humanity of Islam through the words, reflections, and lives of its practitioners.