★Putting Trials on Trial: Sexual Assault and the Failure of the Legal Profession 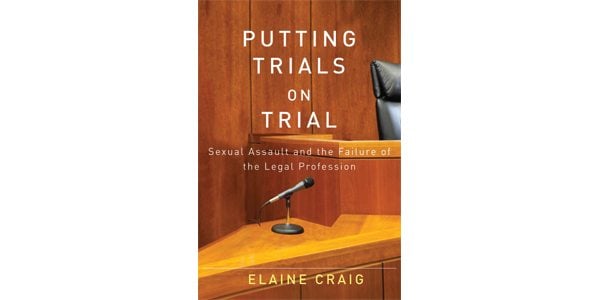 Sexual assault victims contemplate the legal system with foreboding, their instincts for self-preservation sharpened by the experience of sexual assault itself. The punishing cross-examinations of victims in sexual assault trials are well known. Progressive changes to the law, spearheaded by the feminist movement in the 1970s and ’80s, were expected to improve the court experience for women. Rape became sexual assault. Previous sexual experience was deemed inadmissible in cross-examining the complainant, unless the trial judge allowed it. The victim’s counselling records could not be used. Consent to sexual relations was defined as actual and ongoing consent (“No Means No”). Consent could not be implied.

It is clear from Dalhousie University law professor Elaine Craig’s new book that, despite these enlightened laws, women’s self-preservation instincts are right on the mark. With academic rigour, Craig provides a substantial analysis of the effect of a sexual assault trial on complainants. She identifies the ways in which the legal profession exacerbates the harm experienced by sexual assault complainants. Most victims, she argues, are treated with “gratuitous humiliation and denigration.” This occurs despite statutory rules of evidence, common laws prohibiting reliance on discriminatory stereotypes about sexual assault, and the Criminal Code itself. Craig also debunks the myth that women benefit from the law to the detriment of the male accused. She points to statistics that state only one per cent of sexual assaults result in criminal conviction.

Defence counsel tactics are reviewed in detail and found to be aggressive, unrelenting, insulting, condescending, and often illegal. Craig reveals the defence counsel strategy of challenging the victim’s honesty instead of her credibility. Excerpts from trial transcripts allow the reader to witness the extent of the abuse suffered by the women who have the courage to invoke the legal process. Some – such as the Jian Ghomeshi and Mustafa Uruyar cases – will be familiar; they were front-page news.

The author blames Crown prosecutors for failing to adequately prepare complainants for trial and then failing to object to defence counsel tactics that are discriminatory or abusive. She berates trial judges for failing to protect vulnerable complainants, pointing out that a judge can intervene without compromising trial fairness. Craig provides many examples of lawyers and judges who either do not understand the legal meaning of consent or don’t apply it. In several cases described, the judge failed to convict even though he believed the victim. In one case, he found that the accused had an honest but mistaken belief that the victim had consented; in another, the judge ruled that consent could be implied by prior conduct or lifestyle.

Craig proves her point in spades. The author faces squarely the issue of whether abuse of the complainant is the price the legal system has to pay to achieve a fair trial for the accused in an adversarial system. She concludes that the maltreatment of an already victimized Crown witness is not justified by the rule of law, the duties of a defence lawyer, the responsibilities of the Crown prosecutor, or the obligations of the trial judge. Nevertheless, Craig asked every one of the many criminal lawyers she interviewed for the book the following question: “If you or someone you cared about were sexually assaulted, would you recommend reporting it and pursuing criminal conviction?” Most of the lawyers said they would advise loved ones against involving the legal system.

Craig is even-handed in demonstrating how some lawyers and judges are able to be compassionate and humane, while still permitting reasonable cross-examination of a victim witness. In effect, this leads to the conclusion that changes are within the control of the legal profession. The book seeks no change to legislation, focusing instead on confronting the legal profession with evidence of the brutality of its process. Law is a self-regulating profession, and Craig challenges law societies across Canada to apply rules of civility and courtesy, which are already required by the rules of professional conduct, to the treatment of sexual assault victims by defence and Crown counsel. “It is clear that they have the authority and capacity to regulate this conduct,” she writes. “The failure to do so is a choice.” Among Craig’s recommendations is her sensible proposal of government-paid legal counsel for victims, as well as better training in sexual assault for those involved in the legal process.

This thorough and convincing book should be required reading for students and practitioners of criminal law and for the law societies that govern professional conduct. It will be a useful resource for feminists concerned about the treatment of women in sexual assault trials and the psychology professionals who deal with the aftermath suffered by victims.