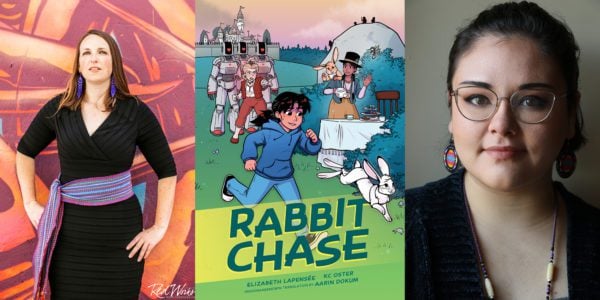 Aimée, an avid gamer and nonbinary teen, feels isolated by their classmates. On a trip to give offerings to Paayehnsag – water spirits who protect the land – they slip into an alternate dimension full of beings from Anishinaabe traditional stories. In this world, they also meet an evil queen who wants to take possession of the land with her robot army. Aimée must learn to stand up for themself so they can help Jiibayabooz fight the evil queen and defeat a black water spirit to get back home. The story is both heartfelt and humorous as we follow Aimée’s journey of self-actualization.

Rabbit Chase relies somewhat on its audience’s familiarity with Alice in Wonderland, which may discourage some readers. That said, LaPensée’s story is so rooted in an Anishinaabe worldview and in Aimée’s personal growth that it is able to stand on its own. This is helped by KC Oster’s artwork, which is bright and engaging and pulls from popular Alice illustrations and adaptations while still anchoring the world and character design of Rabbit Chase in Indigeneity.

The characters in Rabbit Chase often use Anishinaabemowin vocabulary, and the book includes a glossary for readers not familiar with the language, although it only provides definitions, not pronunciation. This inclusion of Anishinaabemowin alongside the cultural touchstones found throughout the narrative is one of the book’s great strengths. LaPensée and Oster firmly root Aimée and their Anishinaabe heritage in the modern world. Aimée both plays video games and participates in cultural ceremonies, worries about Indigenous protocol and their homeroom teacher misgendering them. They are a multi-dimensional character that both nonbinary and Indigenous readers – two vastly underrepresented groups – will be able to see themselves in, while Aimée’s struggle to feel like they belong is universally relatable.

Rabbit Chase is a vibrant take on the classic portal fantasy. Written and illustrated by an Indigenous team, it combines Anishinaabe traditional stories with colonization metaphors and laser-tag fights for land sovereignty to create a vivid new world. For readers unfamiliar with Anishinaabe culture, Rabbit Chase serves as an exciting introduction to new vocabulary and new narratives its audience is bound to enjoy.