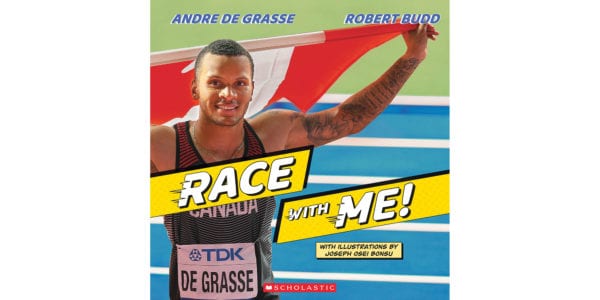 There has been a welcome boom in children’s nonfiction and biographical picture books over recent years. It is terrific to not only see more sports biographies being published but also iconic athletes and trailblazers of different ethnicities and sexualities, such as Misty Copeland and Megan Rapinoe, being featured. We can now add Canadian sprinting champion and Olympic medallist Andre De Grasse to the list.

Written by De Grasse and Robert Budd, with illustrations by Joseph Osei Bonsu, Race with Me! offers readers an inside look at the athlete. Presented in a conversational first-person narrative, with breezy comics-style artwork and photographs, Race with Me! follows track-and-field star De Grasse as he talks about his love of running, being fast, working through nerves, and the emotions of competition. The story builds to the climax of De Grasse proudly representing Team Canada in front of thousands of spectators. As De Grasse takes readers through the steps leading up to the moment of competition – walking up to a grand venue, advancing into the racing oval, going up to the starting blocks, and hearing the pistol start the race – he thinks back to pivotal turning points from his earlier years.

Childhood photographs and illustrations are used to connect present-day De Grasse with concise meditations about being strong, staying positive, and having fun. The overarching upbeat and encouraging message of Race with Me! is common in children’s sports stories and biographies, and the warm, relaxed, and gracious tone of De Grasse’s narrative is sure to strike a pleasant chord with readers. For young sports fans, aspiring athletes, and fans of De Grasse, Race with Me! offers a fortifying and approachable look at a Canadian sprinter’s road to becoming a champion.