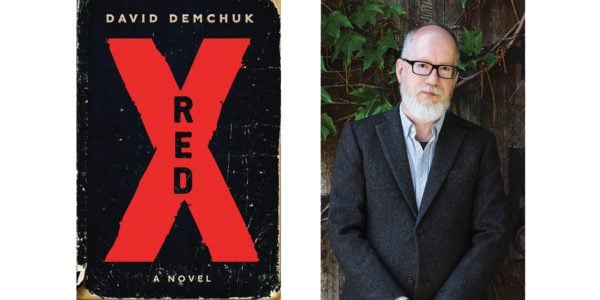 Author and playwright David Demchuk was deeply affected by the murders committed by Toronto serial killer Bruce McArthur; he knew one of the victims personally. But what if the disappearances of gay and bisexual men had been caused by something else, something supernatural? That is the premise of Demchuk’s disturbing and provocative new horror novel.

Toronto-based Demchuk – whose debut novel, The Bone Mother, was longlisted for the Scotiabank Giller Prize – blurs the lines between reality and fiction in this experimental work. At one point in the narrative, Demchuk, as himself, has a Facebook Messenger conversation with Salem, one of Red X’s characters, about research that Demchuk did for his previous novel. These creative disruptions extend to the production of the book itself; at a key moment in the novel, text is distorted by simulated blood streaking down the page.

The story spans 32 years: five chapters are each set eight years apart, from 1984 to 2016. As an ensemble cast with diverse racial and gender identities comes of age in Toronto’s rapidly gentrifying LGBTQ+ village, those they care about disappear one by one. The police are little help; the cops depicted here are queer-bashers, closet cases, and rapists. As friends piece together clues in the disappearances, some commonalities emerge – finding and reading “a blood-red book, inscribed with charms,” bodily markings (in the form of the titular red X), and encounters with a seductive young creature named Nicholas, whose appetites are graphically depicted and most unnatural. Those with a taste for gore should be satisfied, though the truly grisly sections are sparingly apportioned.

Interspersed between the fictional segments are a suite of personal essays in which Demchuk discusses the history of queerness within the horror genre, the real-life McArthur killings, and his own persistent phobias (or, as he calls it, “my life in fear”). His relationship to his body is explored, including a harrowing account of his lifelong struggle with a rare, and potentially fatal, recurring paralysis disorder. What emerges is a portrait of an author and a genre made for one another.

Demchuk establishes a persistent air of disquiet. Rank smells abound. Animals seem harnessed by unseen forces: a hawk flies overhead warily, a gang of hounds menaces, a small bird suddenly smashes into a window. Characters are uniformly hypervigilant – nearly any time any character is alone, they feel as if they are being accompanied, watched, or followed. Demchuk’s unconventional approach to storytelling holds readers close, speaking directly to them and sharing in the terror.

“For centuries, queerness and horror have been intertwined, horror relying on queerness for shock and pungency, and queerness relying on horror for visibility and validation,” Demchuk notes in an essay, adding, “queer characters could take a role at the heart of the story, albeit as predatory unnaturals with perverse desires.” In Red X, he gets to have things both ways – a voracious queer monster shares the pages with a slate of fully realized, human LGBTQ+ characters whose lives, if not for its menace, would be utterly ordinary.