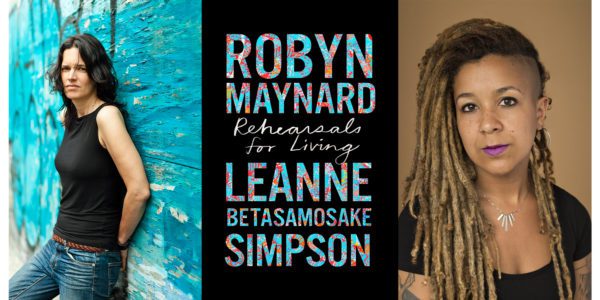 A balm for despair, Rehearsals for Living is an epistolary dialogue between Robyn Maynard and Leanne Betasamosake Simpson that takes stock of our collapsing society and imagines what we might build from the wreckage. Over a year of correspondence, the authors share daily observations, ideas, and memories; these are interwoven with the words and thoughts of other activists, writers, and artists to create a polyphonic work of critical scholarship that radically reframes the concept of survival to map a feminist, abolitionist, and anti-racist path to the future.

The book begins and ends with Maynard at home, “doom-scrolling the multiple crises of our time.” She pens a letter to Simpson because, as she writes, “Our conversations are a salve against the sharp edges of everyday life.” Their correspondence traces the present contours of those sharp edges – COVID-19, police brutality, climate collapse – as well as their connections to centuries of displacement and violence against Black and Indigenous communities, “the apocalypses of slavery and settler colonialism.” As Maynard puts it, “I am writing to you so that we can think together about what it means to build livable lives together in the wreckage.” The repetition of the word together emphasizes the nature of their dialogue; Maynard and Simpson are not so much exchanging ideas as weaving them into a unified theory of living differently. “The refusal to take things as they are as inevitable or a given,” Maynard writes, “this itself is an act of radical imagination.”

The title is borrowed from a lecture by scholar Ruth Wilson Gilmore, which describes abolition as “life in rehearsal because freedom is a place.” Or, as Simpson writes, “Robyn, how are we going to live and how are we going to live together?” In their letters, Maynard, whose work and scholarship focuses on police abolition and Black liberation (Policing Black Lives: State Violence in Canada from Slavery to the Present), and Simpson, a Michi Saagiig Nishnaabeg writer and artist whose works explore Indigenous resistance and resilience (Noopiming: The Cure for White Ladies; As We Have Always Done: Indigenous Freedom through Radical Resistance), reject the ways in which Black and Indigenous struggles have been framed as oppositional, as if there is only so much justice to go around. They decry the broken promises of reform and superficial gestures toward acceptance and inclusion – what Simpson describes as “the recognition, the invitations to perform, the individual validations, the crumbs.” Instead, they seek to answer an urgent question from Dionne Brand: “How do we change the air?”

Maynard’s first letter was written a few months before the pandemic’s onset, and Simpson’s last reply came shortly after the 2020 U.S. election. Both are lyrical, compelling writers, and their early letters are infused with the energy that defined the early months of COVID-19. “People are revolting for wildly imaginative things: for worlds radically transformed, for the end of policing, the end of prisons, the end of ICE and the CBSA, of militarism and colonialism,” wrote Maynard in May 2020. Reading that line now is almost painful; by November 2020, Simpson wrote, “We aren’t banging pots and pans every afternoon in support of health care workers. No one is baking sourdough.” If you find yourself, in 2022, crushed by exhaustion and despair, you might ask yourself: is there any hope left to truly change things?

Maynard and Simpson would probably say this is the wrong question. Simpson writes, “Our movements and mobilizations do not have the privilege of resting upon a fleeting emotion. The absence of hope is a beautiful catalyst.” Elsewhere, Maynard notes, “Even though I will dip my toes into cynicism now and again, I won’t let myself reside there.” They keep writing to one another, but also working: protesting, advocating, teaching, gardening. Maynard and Simpson, both mothers, ground their efforts in the very urgent need to create a survivable future for their children and communities.

In many ways, Rehearsals for Living is a work of apocalyptic nonfiction that examines the ongoing collapse of society and its aftermath. Apocalyptic fiction like Cormac McCarthy’s The Road typically imagines that violence and chaos inevitably follow society’s destruction, where each rugged individual must fight to survive in a lawless land. But Simpson and Maynard point out that our societies and their laws have always been violent toward Black, Brown and Indigenous people, and living depends on interconnectedness, not self-sufficiency.

As an invocation for collective resistance, the book succeeds, but it’s also powerful when the authors share the small details of their lives – Simpson’s meditative nighttime runs with her daughter, Maynard effortfully tolerating the spider on her stairs – that ground their ethics in the reality of daily living. At times, their dialogue wades so deeply into critical theory that the epistolary structure is obscured. But when Maynard writes, “I miss you, Leanne,” in the midst of one didactic letter, it is a heart-rending jolt of intimacy.

The world will not go “quietly or easily,” Simpson writes. “[It] will ignore the piles of evidence, it will be immune of the mounds of Black, Brown and Indigenous bodies, it will destroy every species and contaminate every molecule of this world, and it will live in denial until the very end.” And yet, she argues, “we world-build anyway, as a practice, as a way of life.” In their collaboration, Maynard and Simpson have crafted a powerful argument that communion is both necessary and generative, and that the possibility of a better world exists as long as we are able to imagine it together.