Return: Why We Go Back  to Where We Come From 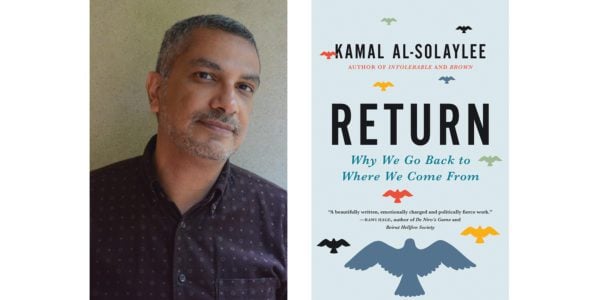 While immigration is fuelled by practical concerns, return migration is usually driven by a deep, impalpable desire for the homeland. Kamal Al-Solaylee – bestselling author, journalist, and new director of the UBC School of Journalism, Writing, and Media – knows this. In his latest book, Return: Why We Go Back to Where We Come From, he wrestles with the most basic yet universal immigrant’s question: What would it be like if I actually went home?

Like almost every immigrant I know, myself included, he is captivated by this idea. But returning to one’s country of origin isn’t simply about an emotional pull that can’t be shaken. The notion of return is brimming with economic and cultural frictions and with considerations about what is fair in an increasingly challenging political climate. Yet as Al-Solaylee notes, “In one hell of a silver lining, the expression ‘go back to where you come from’ no longer sounds to me like a racist chant or a threat.”

Return is split into three sections offering different lived accounts, all bookended and peppered with Al-Solaylee’s own experiences and insights. These narratives include stories from countries with complicated circumstances, such as Northern Ireland and Taiwan, and culminate with the most contentious territory of all, the land of “two competing narratives of return”: Israel and Palestine.

People return to their homelands, he proposes, for myriad reasons. For some, like José Ramón, who returned to the Basque Country after a long, successful career in the United States, the decision was based on cultural ties. It felt predestined: he was always going to return home to die. For others, like Courtney, deported back to Jamaica after a lifetime in New York, returns are more difficult to reconcile.

The hunger to comprehend the underlying reasons that connect the immigrant diaspora begins for Al-Solaylee with a surprising yearning of his own: a house on a mountain in Aden that his father built in the 1950s beckons to him. But the sentimentality of such an idea makes way for more practical concerns. How can one voluntarily return to Yemen, a country in the midst of war – especially with an atrophied command of Arabic?

What’s indisputable is that the global phenomenon of reverse migration has been historically understudied. Return dives into this world of tensions, longings, regrets, and acceptance. “There’s something deeply rational and inherently irrational about returns, and the essence lies in that friction between the two.”

Ultimately, he comes to understand that we immigrants share common delusions about our homelands, what we’ve left behind, and whether we can pick up where we left off. Igor, who left Tbilisi for Israel after the former Soviet Union collapsed and then briefly returned, sums it up perfectly. After over two decades in his adopted country, a happy marriage, children, and new memories, “Georgia existed only as nostalgia. ‘When you move to another country, the only thing that stays in your memory is your house, the tree next to your house and the bench.’”