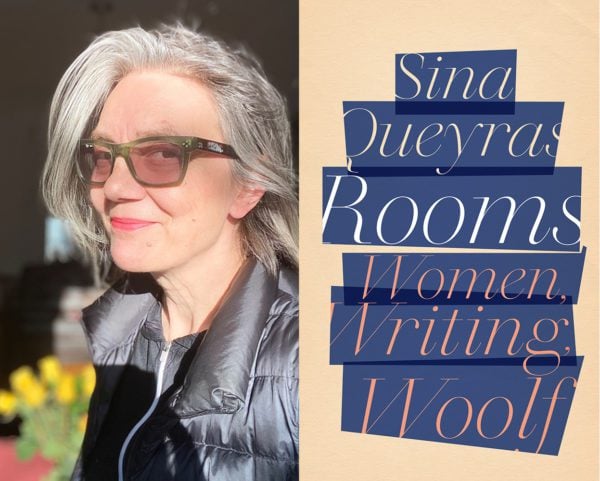 Each chapter of Sina Queyras’s Rooms: Women, Writing, Woolf opens by revisiting the corresponding chapter of Virginia Woolf’s A Room of One’s Own. For example:

But, you may say, we asked you to speak about women and fiction—what has that got to do with a room of one’s own? (Woolf, Chapter 1)

But, you may say, and I do too, no one is asking you to speak about women and fiction, or Virginia Woolf and writing in the twenty-first century, or indeed what it means to have a room of one’s own—or even what it means to be a woman. (Queyras, Chapter 1)

It’s a bold, even risky strategy. After all, Woolf is “the writer thinking women the world over have been returning to again and again for a hundred years.” How “could I stand,” Queyras wonders, “even in the shadow of her genius?” Inhabiting Woolf’s own language is not an act of hubris, though, but a deft illustration of the book’s central topic: Queyras’s long-standing creative engagement with Woolf’s writing. “Again and again,” Queyras explains, “whenever I lose my way, I go back to Woolf. I go back to her texts and I realign myself.”

Queyras, writer, poet, and senior lecturer at Concordia University, is apprehensive about adding to the vast accumulation of writing about Woolf. “Who am I to write this book?” they worry. “Surely there is someone better suited to the project.” Not so: Rooms belongs to the genre of the “bibliomemoir” (other examples include Rebecca Mead’s My Life in Middlemarch and Nell Stevens’s Mrs. Gaskell and Me), and thus is a personal – and not a critical or biographical – project. Queyras rightly decides that “no other mind, however brilliant … [is] well suited to describing my own relationship to Woolf.”

That relationship begins with an assignment on Woolf submitted at Malaspina College in 1988: “The essay may have been entirely imperfect, but it contained the most blood I had ever spilled.” The professor gives it a B, and their heated exchange about his assessment ends with his hurling a volume of the Norton Anthology at Queyras. Like the beadle who warns Woolf off the grass in A Room of One’s Own, the professor is an enforcer, policing both academic and gender conventions. Queyras leaves him behind, moving on to creative writing programs at the University of Victoria, UBC, and then Concordia, but “the constant low-grade whistle of pain and confusion that only women could hear” persists.

Over the years, Queyras struggles to define their identity, find their voice, and “make a writing life.” Though many writers influence Queyras along the way, including Daphne Marlatt, Constance Rooke, and Marilyn French, Woolf remains the touchstone. “How did she manage the revelations of self, shining out from the core of her text?” Queyras asks. “It was this self I was interested in.” Queyras acknowledges Woolf’s privilege, snobbery, and antisemitism, but it is “the room that Woolf built” – a metaphorical and conceptual space that enables others to “luxuriate in our thinking” – that ultimately matters. In turn, Queyras aspires to be “a conduit, a portal, a room people can move through.”

As a genre, the bibliomemoir promises to illuminate both the autobiographical and the literary subject. Rooms doesn’t quite succeed at this dual mission. “I can anticipate the criticism,” Queyras says. “‘She needs Woolf; Woolf does not need her.’” To some extent, this is true. Rooms is not particularly enlightening as a book about Woolf, and its case for the continuing relevance of A Room of One’s Own seems unnecessary given Woolf’s pervasive presence in contemporary literary culture, something Queyras amply documents. Woolf’s presence, however, enriches both Queyras’s life and Rooms, which, as a book about Queyras, is an engaging, thought-provoking, occasionally harrowing story of personal and artistic development – and, finally, flourishing: “I look in the mirror and see myself emerging.”

Rooms is least convincing as a manifesto about women and writing, as a revision (as those chapter openings signal) of A Room of One’s Own. It lacks the polemical clarity and rigour of Woolf’s original, and its organizing logic is not always evident. In A Room of One’s Own, Woolf’s anger is subsumed in her art; Rooms, by contrast, is at times prickly, defensive, or heavy-handed. Queyras frequently expresses confusion and self-doubt: “It isn’t until I say this out loud that I realize this is what I am trying to make clear in this book.” This may be strategic, a deliberate refusal of Woolf’s magisterial authority, but it can make the book seem unfinished, its goals uncertain.

Is that really a problem, though? After all, what kind of “peroration” do you write if you want your room to be an opening, rather than an enclosure? “What will the reader feel in my spaces?” Queyras asks. “What will they see?” Queyras hopes their readers will find what Queyras found in Woolf: freedom and joy.