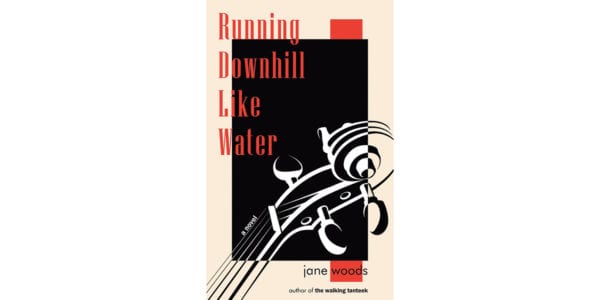 There’s a line in Marguerite Duras’s The Lover: “It’s not that you have to achieve anything, it’s that you have to get away from where you are.” In Jane Woods’s second work of fiction, Running Downhill Like Water, four residents of fictional Sainte-Clémence, Quebec, have all tried to do just that – to move beyond their restrictive lives in their hometown. In interconnected stories, Woods traces how each tried and failed to escape, even as their lives overlapped, an inevitability in a small community.

The reader first meets Lucy Brickwood, isolated and bitter and full of adolescent turmoil stemming in part from her parents’ divorce. She turns away from her harsh reality to a world of fantasy, but she stews in anger at herself for failing to create the connections to others she so desires. Her neighbours, the orphaned brothers Evan and Neil Labossière, struggle with their rigid evangelical upbringing, both leaving Sainte-Clémence as soon as they can. Neil returns to his hometown a recluse after a breakdown in Thailand, and Evan becomes his caretaker, giving up an acting career that was more about hiding from himself than the pursuit of professional success. Lucy’s formative rejection is at the hands of someone she desperately wants as a friend, Sheila O’Meara, the least talented member of a musical family. Sheila’s flirtation with Marxism leads to an unwanted child conceived in Albania, and her life, dominated by the demands of motherhood, is spent in the shadows of her successful siblings.

Woods focuses her exploration of these characters on specific wounds and the way these individuals, who have harmed and protected one another in turn, shape each other. Each formative failure is catastrophic – the kind of hot shame that keeps you awake at night, years later – and weighs on the characters, shaping their choices and keeping them from peace or self-acceptance. Though none of them have the life they imagined for themselves, they eventually find value in their present circumstances.

Running Downhill Like Water reads quickly, and Woods, through her third-person omniscient narrator, is adept at portraying emotional anguish. But with the intense focus on the interior lives of her main characters, Woods’s book lacks a curiosity about the rest of the world. The forays to Thailand and Albania are filled with stereotypes, and most of the minor characters feel slight. It’s unclear whether this disinterest is that of Woods or her characters, but their underdevelopment stands in sharp contrast with the author’s skill at probing individual psyches. Still, Woods, with great care, “bears witness to,” as one character states, the choices and struggles innate to even the most ordinary of lives.