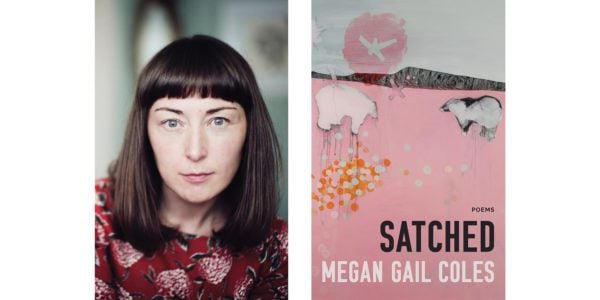 Satched – a slang word for drunk, soaking wet, or weighed down – perfectly captures the tone of this confessional work by Megan Gail Coles, a 2019 Scotiabank Giller Prize finalist turning her hand this time to poetry. This personal monologue rambles about the bay in a tipsy tour and, in relatable vernacular, reflects on regular domesticity.

Themes of damaged self-esteem, sexual mistakes, and anxiety pervade the narrative, tempered with commentary on family, home, and life as a paradoxical contemplation: “Clip a piece / of yourself off / like a houseplant / the cat gnawed on all winter. / You, too, can be reborn in water.” In a loose arc, Coles takes a run at feminism, substance abuse, second-guessing, and inherited family trauma.

The poetics culminate in a proliferation of enjambed sentences, general pronouns, and a spate of second-person narration. Some poems read as sprawling streams of consciousness. I posit that a confessional poem must contain an elevation to the universal – a commentary on human nature or an observation on society that indicates friction or tension. While Coles achieves that very thing in her best poems, the quality is inconsistent. Her best work resides in the social commentary “‘150% Chance of Committing Another Crime,’” in which she reflects on the consequences of releasing repeat sexual offenders from incarceration and the lack of places to address these judicial malfunctions: “A serial offender with 97 charges on this ticker tape / darts back inside where the mental-health doctors / have already suspended him from intense sex rehab.” Even in these lines, however, the elegance of the poetic consideration is crudely fashioned with a prosaic underpinning.

Coles charms with her lilt and cadence, while attention to landscape flows in the lines from “Social Studies”: “Why humans live / on our lonesome island anyway? Why / they ever lived there at all, really? What with / the Northeasterly wind and blowing snow.” She is a clear-eyed observer of the place and unmistakably in love with it and all of its inhospitable foibles.

Her line-level cadences playfully root in the unmistakable musical accent of Newfoundland. Traditional sea shanties echo in folksy lines, such as “Skipper Jack, my mother reads, called free to / Billy, Billy my b’y, what are you doing with her? / Murderers were, and remain still, someone’s b’y / even when interrupted in the act of murdering.” In these poems, she captures the specific cultural rhythms of that vernacular. Coles said in an interview with CBC that she “[does not] shy away from accent or diction,” and this collection trills of the region and its distinct speech.

Despite the debut collection’s unevenness, Coles creates an intimacy in Satched through her urban maritime lens and straightforward style.