Scion of the Fox: The Realms of Ancient, Book 1 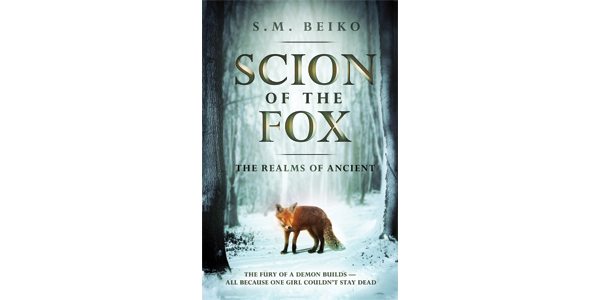 Foxes, rabbits, deer, seals, and owls. These are the ancient, founding “families” of the human-spirit-animal hybrids that populate the rich mythology of S.M. Beiko’s new fantasy saga. Scion of the Fox is the first of a planned trilogy, and given Beiko’s sophisticated world-building, there’s more than enough to see writer and readers through at least two more volumes.

The book follows Winnipeg teen Roan, who is discovering her connection to the fox family when she stumbles across a dead girl who looks just like her. One of the delights of the book is its unapologetic, lovingly detailed depiction of Winnipeg, not just as a backdrop, but an essential part of the narrative. The city has appeared in fiction before, but rarely so prominently; several battle scenes make use of the city’s landmarks as dramatically as King Kong climbing the Empire State Building.

Roan is confronted by her unexpected membership in the magical animal clan when a talking fox shows up in her yard and takes on the role of adviser, guiding her through the strange and unknown world she is being drawn into, and to which she discovers her dead parents were connected. The battles that arise pit the animal families against one another, with alliances shifting, even as a larger and darker enemy looms beneath the frozen surface of the city’s Assiniboine River.

Beiko sets herself a big task, creating a mythos that rises almost to the level of religion. The result is occasional exposition-heavy passages and a steep learning curve for readers. But for those who appreciate the development of complex and detailed worlds, Beiko’s creation is a gift.

While the book’s ancient realm is impressive, the most unique aspect is its tone. Roan is a modern teen, who happens to be tasked with uniting the five animal families and overthrowing their snake-monster enemy. Her attitude in calling out the absurdity of her Chosen One status gives the book an authenticity and immediacy that is sometimes missing from contemporary fantasy. No suspension of disbelief is required for the majority of Roan’s reactions. As she sneaks out of the house with her new fox companion, she grumbles, “Can’t you just go invisible or something?” At times, Roan’s spunky and believable dialogue and reactions rub a little awkwardly against the book’s high-fantasy world: She complains about all “the haters,” except she isn’t referring to the resident mean girls, but rather a mythical enemy intent on her demise. But more often the contrast in tones is what makes the book feel fresh and inviting.

Despite her initial misgivings, Roan fits many of the traditional Chosen One trappings: She’s orphaned, knows little of her mysterious parents – who died suddenly – and she’s got an enemy who hates her simply for the role she was born into. On the less magical side, she’s a low-key misfit at school with a single loyal friend. Instead of contorting the narrative to avoid these tropes though, Beiko pays homage to the genre conceits while still creating something new and intriguing. At times, she goes refreshingly rogue: Roan’s adult guardians are given significant roles, rather than simply fading into the background or making stale turns as stock meanies.

Scion of the Fox is a big, ambitious book bursting with a well-crafted magical world. Beiko wrestles her intricate plot well, pulling the threads together at the end to set up the next instalment in an intriguing way, with a protagonist who has grown, changed, and is likely to earn a dedicated following.