★Seb and the Sun 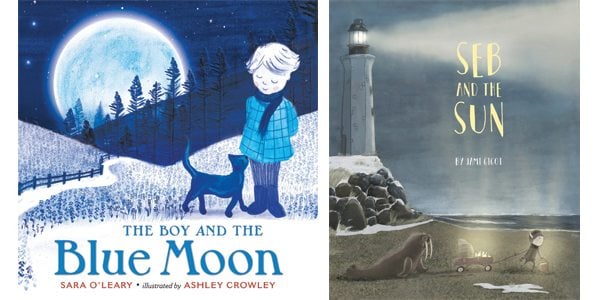 Back in 2011, disgraced former Fox News host Bill O’Reilly made a baffling on-air argument for the existence of God: “Tide goes in, tide goes out,” he said to his guest, an outspoken atheist. “You can’t explain that.”

O’Reilly was justly mocked for his meme-worthy display of oceanic ignorance, but perhaps in that moment he was only indulging his imaginative inner child. Very young people see the workings of the natural world as simultaneously mysterious and easy to grasp. Stars are a bajillion miles away, but they look like pin holes in a construction-paper sky. So maybe they are.

Two new picture books play with the idea of planetary science as a little kid might conceive of it. In the first, The Boy and the Blue Moon, the extra full moon to which we are occasionally treated is not just an interesting quirk of celestial timing, it’s a moment when the usual earthly rules are suspended. “On the night of the blue moon, anything can happen,” explains the unnamed boy to his companion, a cat.

Boy and cat wander into the woods during a blue moon, marvelling at how their surroundings are transformed by this lunar event. For one thing, a lake has suddenly “appeared where there’d never been a lake before.” They row out to the centre of it, where a mysterious light draws them up to the surface of the moon. The two frolic in near-zero gravity until the boy begins to feel lonely, and they float back home. The next thing he knows, it’s morning and he is in bed.

Montreal author Sara O’Leary is a master of hushed, patient narratives that feel timeless without being fussy or old-fashioned. The tale she tells is instantly familiar and clicks together beautifully. When the nocturnal sojourn shifts from slightly odd to otherworldly, the move is presented with exactly the right mix of wonder and simplicity.

For the most part, British illustrator Ashley Crowley’s images are a good match for O’Leary’s text. His deep-blue and indigo rendering of the moonlit fields and the deeper parts of the forest are gorgeous. The moon’s surface, however, turns out to be a barren, monochrome landscape of rocks and craters into which the image of the boy and the cat never quite meld visually. It’s no surprise they return to Earth – who wants to live on a dead rock?

Vancouver author-illustrator Jami Gigot’s Seb and the Sun is a more successful matching of text and visuals. Her previous picture book, Mae and the Moon (2015), is about a girl so obsessed with the moon she tries (unsuccessfully) to fly to it. Gigot’s new book is a kind of companion to that debut. Young Seb lives in a small coastal town far enough north to be dark half the year. Tiring of the winter gloom, he sets out with his friend, a walrus named Walrus, to find a way to bring some light and warmth to his home and his neighbours. He and Walrus row out into the ocean and procure an entire bucketful of raw sunshine. They pour it into bottles they’ve scavenged from the shore, making warm, glowing gifts for everyone in town.

The images in Seb and the Sun are rich and deep. Despite its location, Seb’s town feels warm and alive. The boy’s Viking-style winter hat is a nice touch, too. Gigot takes a risk in choosing a setting stuck in perpetual darkness, but it pays off handsomely. Most of the book’s colours are muted to the point where parents will need the aid of a good reading light, which has the paradoxical effect of drawing the reader in. It also makes the appearance of the captured sunshine all the more welcome and joyful.

Both of these books are great bedtime reading picks, but by offering a fresh take on a familiar theme, and by literally bringing light to darkness, Seb and the Sun is the kind of book that could easily become a lifelong favourite.