★Seconds Out: Women and Fighting 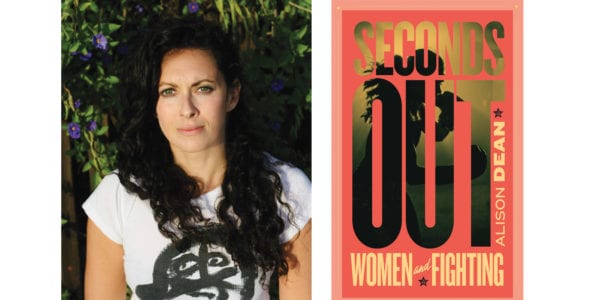 Shortly after finishing her PhD, finding herself “burnt out and restless,” Alison Dean convinced a friend to go to a kickboxing class with her at a neighbourhood gym. Both were new to the practice – in fact, Dean hadn’t played any sports since high-school volleyball – and they awkwardly tried to keep up with the rest of the room. That would be the friend’s first and only class, but Dean was smitten. She’d been searching for a physical activity to ground her, and, to her surprise, she found it in kicking and punching people. The first class opened a door to a new life that would run parallel to her academic work, one in which Dean split her time between teaching English literature and preparing for amateur fights.

But even as she felt welcomed into this community, Dean was conscious of the ways in which gender coloured her experience. Men were reluctant to spar with her; remarks such as “You punch like a girl” were hardly meant as compliments; and though plenty of women had come before her, Dean found that they either weren’t popularly known or else were infamous for something other than their time in the ring. These experiences were the foundation for Dean’s first book, Seconds Out: Women and Fighting, part memoir and part exploration of how martial arts and gender intersect.

Seconds Out is, to put it bluntly, a joy to read, even for those (like this reviewer) who have no real interest in professional fighting. Dean deftly uses her own experiences to introduce each theme, explaining each deep dive in a way that feels accessible but not oversimplified. Dean’s writing is clean and engaging and moves along at a good clip; there isn’t a boring chapter in this book. She does a fine job of balancing writing about herself with presenting information about her subject, which is always a challenge with this type of approach. She’s funny, relatable, and has a gift for drawing readers into this very particular world.

There are a few topics in Seconds Out that could have been expanded on. In particular, the practice of cutting – in which fighters try to reduce their weight, sometimes drastically, before matches so that they can be at the top of a lower weight class – is graphically described but not explored. Dean mentions that some of the techniques used for cutting can cause kidney failure or even death, and she describes one woman who developed an eating disorder due to the practice, but it feels like she could have delved deeper into the darker side of weight and fighting.

Otherwise, Dean’s work is strong in all respects. One lasting image is a moment when, due to a fluke, Dean has to wear her back-up mouthguard during a fight. It’s one that was jokingly ordered for her by a friend and has the word “patriarchy” emblazoned across it. Seconds Out feels, in the best possible way, like patriarchy getting punched in the face.