Secrets of the Sprakkar: Iceland’s Extraordinary Women and How They Are Changing the World 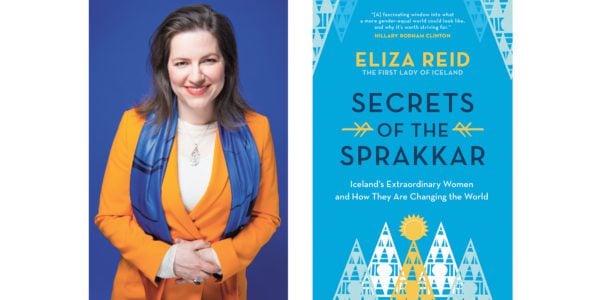 In 2003, when Canadian Eliza Reid moved to Iceland “for love,” she was already embarking on a unique experience; as recently as 1996, as Reid writes in her new book, Secrets of the Sprakkar, “a mere two per cent of the population were immigrants.” (More recently, the figure has risen to 15 per cent.) And Reid’s perspective would only grow more exceptional. Her husband, Guni Th. Jóhannesson (they met as graduate students at Oxford University), was elected president of Iceland in 2016, making Reid that country’s first lady, an unofficial role that comes with considerable duties and functions.

Being first lady brings public scrutiny, to which Reid has responded thoughtfully – and sometimes with playful provocation. Since receiving a message from a stranger advising her that green is not her colour, she explains, she has committed to wearing more green. In 2019, she published an opinion piece for the New York Times about how political spouses weren’t just props, including the line “I am not my husband’s handbag.” And she has committed to using her platform – one she never expected while growing up in the Ottawa Valley – to challenge traditional gender roles, which is especially meaningful in a country that’s already recognized as one of the best places on earth to be a woman.

For this delightful love letter to her adopted nation, in which she employs an engaging blend of reportage and memoir, Reid profiled several sprakkar (an ancient Icelandic word for “extraordinary women”). They include a politician who made headlines for breastfeeding while addressing Parliament, cold-water swimmers, a fishing boat captain, a “sex advisor” who also runs knitting tours (Icelandic people wear many hats), activists, entrepreneurs, musicians, and more. Reid’s lens encompasses intersections of race, disability, and gender. She also writes about famous Icelandic women from history, including figures from the Icelandic sagas and, more recently, Vigdís Finnbogadóttir, who, in 1980, became the world’s first woman to be democratically elected as president.

Reid addresses much that makes it better to be a woman in Iceland, including child care programs, generous parental leave, a family-friendly work culture, quotas for the number of women on corporate boards, and a lack of stigma around sexuality and single parenthood. But Iceland, too, is imperfect, and Reid’s consideration of the challenges still remaining in achieving gender equality are insightful.

While Iceland is an extraordinary country in many ways, Reid shows that the women who live there want the same thing most women do: the opportunity to live their dreams without gender as an impediment. What’s different about Iceland is that it is a society where there is no longer a question of why gender equality matters, but rather one of how to best translate these ideals into reality, and this is a lesson the rest of the world will benefit from learning.