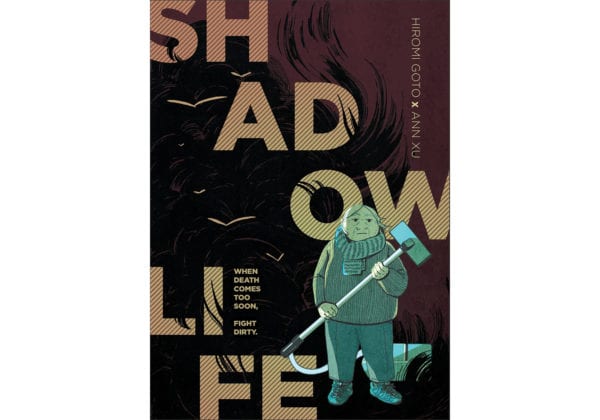 Award-winning novelist and poet Hiromi Goto has written her first graphic novel, illustrated by debut artist Ann Xu. Together in Shadow Life, they tell the tale of Kumiko, an elderly woman who battles the shadow of death, armed only with tenacity and a second-hand vacuum cleaner.

When we first meet Kumiko, she is on the run from the long-term care home where her well-meaning adult children placed her. Soon she has her own apartment and struggles with life in a body that is not as strong as it used to be. And yet she perseveres, with dignity and good humour. She swims, takes her pills, makes noodles, and somewhere along the way starts to see death’s shadow. Sometimes it takes the form of a crow, sometimes a black cat. She wonders if these visions are real or “ideas of a demented mind.”

Goto and Xu skilfully weave in ambiguity to make a reader wonder if this is fantasy or a realistic literary treatment of a hallucinatory imagination (think Michael Redhill’s Bellevue Square). Graphic literature is uniquely ideal for such a journey. The monsters of manga masters like Junji Ito are metaphorical fears given flesh and blood, physical beings as much as they are symbols. By speaking in the language of pictures, as opposed to prose, you can have both at once. Death may seem like a spider that can’t wait to get its teeth into the protagonist – but it’s far more fun for the reader when it actually entangles her in its web. Soon we realize that the black spots and creeping running shoes that haunt Kumiko are perilously real.

Oh yes, shoes. Goto injects a slice of local British Columbian Gothic by including a real-life horror. In the last dozen years, severed feet have washed up with disturbing regularity on the B.C. shoreline. Kumiko later finds herself pursued by a ghost walking around on its bony stumps. In this creature, Goto and Xu envision a true Japanese-Canadian spirit – think the girl from The Ring in a plaid jacket. This playful hybrid sensibility thrives throughout the novel.

Shadow Life is not about death per se – it’s about how to live. Kumiko runs from the assisted-living centre because she is stubborn, yes, but also because she wants to exist on her own terms. In her struggle to do so, she will need the help of friends both old and new. How Kumiko grapples with and comes to accept strangers, her gay landlords, and her former lover Alice into her life are what give the novel its heart. The scene in which she first butts heads with hardware-store owner Meena particularly sparks on the page.

Kumiko is a compelling protagonist, one with an intersection of identities rarely seen in graphic fiction or even Western literature. Goto writes in her author’s note that graphic novels “can perform representation literally.” In visual mediums, it’s seeing that’s important; here, a character historically left in the margins takes up space and fills the pages.

Xu has a fluid line to her illustration style that feels indie with a touch of Hayao Miyazaki. Every face is expressive, lived in, real. Her creatures reside between creepy and cute, from the Catbus-esque shadows to the sprites going for soap rides in Kumiko’s bathtub. Xu’s panels of everyday life are appealing, from the jingle of the door of the hardware store to the rounded and familiar buses. Her style also nails thematically resonant depictions of water, giving it an inky blackness that threatens to swallow you whole.

Shadow Life balances the quotidian and the mythical – with equal space allotted to the preparation of meals as to the movement of shadowy spirits – honouring both the world we live in and the one that lies beyond. In doing so, Goto and Xu create the perfect setting for finding dignity and practising compassion in one’s advancing years.