Shelter: Homelessness in Our Community 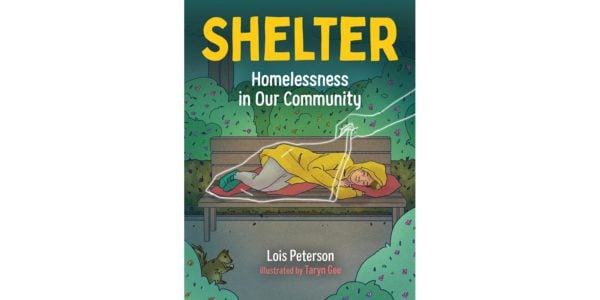 This Orca Think nonfiction book aimed at middle-grade readers is an important and well-intentioned guide to homelessness that provides facts and statistics from across the United States and Canada. Peterson explains the root causes of homelessness using concise, non-judgmental language. Visually, the book is bright, well laid-out, and appealing, with many current pictures – one even features homeless people, masked, and standing in line to receive necessities – and Gee’s vibrant, empathetic illustrations showcase the different experiences of people living on the street.

Peterson, who previously worked as a librarian and a homeless-shelter employee, uses the information she’s learned along the way to encourage children to think critically about this issue and to look at unhoused people with understanding and compassion. Examples of real children and adults are given, and the racial and socio-economic causes are not glossed over but addressed fully. For instance, it can be difficult for newcomers to find jobs in their adopted countries, and seniors who can no longer work might struggle to pay rent in expensive cities. Experiences such as dumpster diving, sleeping rough, and hoarding belongings are explained in simple terms that children will understand. Additionally, sidebars bust common myths, such as that all homeless people are drug addicts or live on the street by choice, and offer uplifting solutions. This reviewer especially loved learning about how two Montreal teenagers, Pasha Jones and Adrianna Vutrano, invented a backpack that converts into a sleeping shelter (called a “Portable House”).

Peterson digs into the ways libraries and homeless communities intersect, a connection unknown to most non-library people. She also addresses non-profits, churches, and government help, providing information about the different services that exist. The book ends with a glossary and resource list.

Shelter is an insightful deep dive into a huge issue that is presented in a sympathetic and accessible way. Overall, the content makes for a well-written, thoughtful primer that would prove useful for children and adults alike.