Small in the City

Small in the City tells the story of a child’s vivid urban journey that is initially frightening, then familiar. This is the first time that award-winning illustrator Sydney Smith has created both the text and the illustrations in a picture book, and the result is a quiet tour de force.

A small child negotiates the streetcar, the busy streets, and the lurking dangers of a big city that is easily recognizable as Toronto. The boy (or girl – it’s up to the reader to decide) is surrounded by noise, rushing cars, and confusing traffic lights. The city is overwhelming – but the child knows what to do and where to go. He rings the bell for his stop and descends into the crowd on the pavement, making his way through the sidewalks and skyscrapers. The child begins to comment on the sights around him, giving an unseen friend advice about how to find one’s way through the city when one is very small – pointing out which alleys to avoid, which yards have angry dogs, which trees to climb. By the end of the book, the bustle of the city has retreated into the background, and we discover that the child is talking to someone even smaller than he is. The book ends with a heart-searing twist.

With his haunting artwork and sparse text, Smith has captured the perfect balance between fear and familiarity. This book reassures small children that they can find their way through their fears to a place of safety. 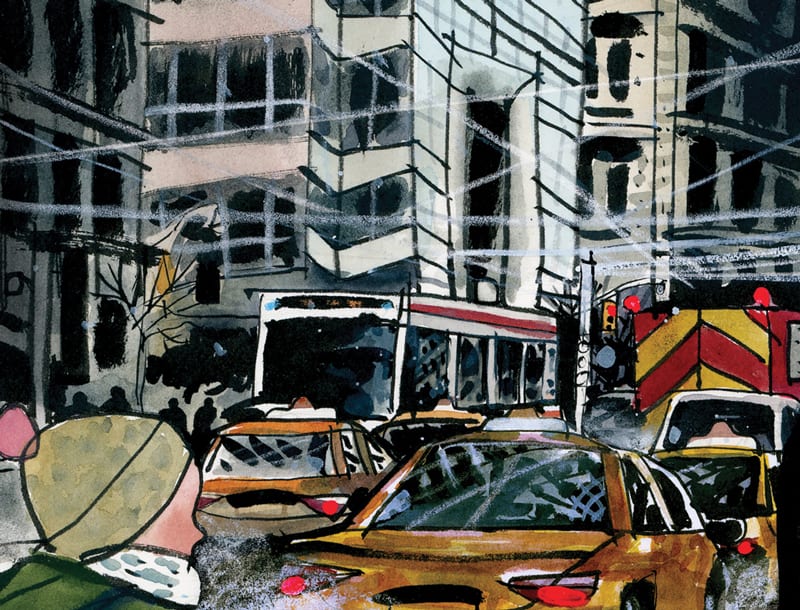 Smith’s masterful illustrations begin with fuzzy images seen through a dirty streetcar window followed by dark, menacing snapshots representing the fragmentation and chaos of the city. Slowly, the pictures change to friendlier scenes and familiar landmarks. There is always a sense of movement – people, traffic, snow, and wind.

Like a fairy tale where the hero treads a dangerous path to find his way to order and happiness, Small in the City takes the reader through darkness into light. This is a lovely book, illuminating both the trepidation and growing confidence of a small child in a big city.