So-Called Normal: A Memoir of Family, Depression, and Resilience 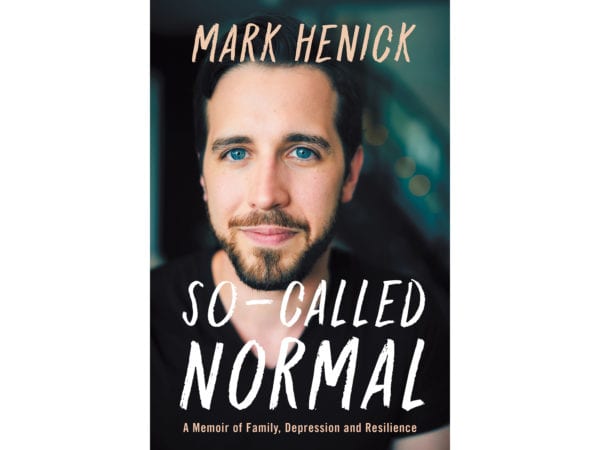 At 12 years old, Mark Henick knew he had mental-health issues: anxiety, depression, insomnia, and suicidal thoughts. At 15, he tried to kill himself. For those familiar with Henick’s wildly popular 2013 TEDx Talk, the opening scene of his new book may be familiar: he stands on the edge of an overpass, with onlookers encouraging him to jump.

In So-Called Normal, Henick details intimate moments from his childhood living with an abusive and unstable family in small-town Nova Scotia. Growing up in Sydney, on Cape Breton Island, Henick suffered from pressure to conform to a “normal” small-town ideology. He writes, “Even small towns have their own internal divisions and order. … We all slotted things into neat little compartments, and that kept things normal. Small-town culture is a fragile balance, fiercely guarded.” Henick fought inner demons, but the turmoil of his home life prevented him from receiving help: his father was an adulterer, his stepfather was emotionally neglectful, and his mother was ailing from undiagnosed seizures.

So-Called Normal is split into four sections: Summer, Fall, Winter, and Spring. Structuring his life story by way of the seasons builds narrative tension as Henick recounts his growth from childhood innocence into adult experience. The memoir maps key moments in Henick’s maturation until, as a father, husband, and mental-health advocate, he is able to reflect on prior uncertainty and bring the book to a heartfelt and hopeful ending.

Henick frankly lays out his adolescent trauma and instability that resulted in a series of suicide attempts and multiple visits to the psychiatric ward. The health care system’s response to Henick’s mental illness was inadequate, to say the least. The author isn’t shy about detailing the emotional mindset of standing on the precipice of taking his own life, and he also strives to expose the inconsistent treatment of mental illness and the various unsatisfactory ways we, as a collective, talk about mental illness in adolescents.

Throughout the book, Henick turns to metaphor as a way to illustrate his mental state: at one point, he compares his outlook to the crumpling, abandoned warehouses of Sydney. The technique proves useful in anchoring the author’s memories of depression. Time and again, Henick finds concrete ways to describe the floating temperament of depression and to explain his unmoored absent-mindedness: “I could feel, but I was numb; I could see, but my vision was narrow; I could hear, but voices sounded slow and slurred. It was as if my brain was shutting off.”

His memoir might particularly help readers living with mental-health issues to recognize patterns of depression, put words to emotions that feel indescribable, and bring into focus both useful and unhelpful medical and therapeutic techniques. The author’s first-hand experience has given him the fire to combat mental-health stigmas in Canada.