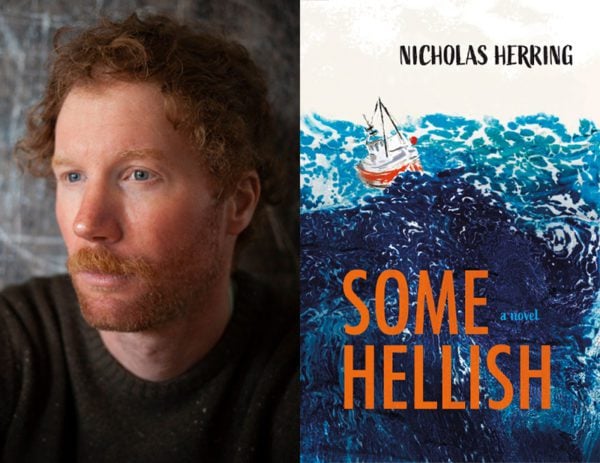 When most people think of the Prince Edward Island of literature, the image that comes up is of red-haired Anne Shirley and her romantic, sentimental adventures. But there is another, more rugged tradition of Atlantic fiction that has less to do with L.M. Montgomery’s mythologizing and more to do with a hardscrabble, existential battle for mere survival. It is within this tradition, one espoused by writers such as Linden MacIntyre and – especially – David Adams Richards, that P.E.I. resident Nicholas Herring locates himself for his debut novel.

Indeed, the one time Montgomery is alluded to in Some Hellish (the title alone should clue one in to the antagonistic nature of the novel’s setting and scenario), it is explicitly to deny the prettied-up vision she espoused. In the view of Marceline, one of protagonist Herring’s two daughters, Green Gables is “a story that was never real and then someone built a house after it and now people come from all over to visit it.”

This tourist-friendly postcard rendition of P.E.I. is about as far removed from the fictional Herring’s own experience as it’s possible to get. Along with his buddy, Gerry McClellan, Herring ekes out an existence lobstering (the word is a verb as frequently as it is a noun in the novel). This involves extensive, painstaking preparation in advance of the season, followed by the uncertainty of variable yields during the short window during which the fishers can set their traps. Competition is brutal and tensions often run high.

Given this rough landscape, it is probably not surprising that Herring self-medicates with drugs – acid, cocaine, and alcohol. Or that his ontological pain is so acute that he takes a chainsaw to his living room floor and cuts a hole through which to place a hoist, a kind of literal mechanism to dredge up material from underground and lift it into the light of day. If this metaphor seems a bit too on-the-nose for a character who is essentially trapped in a rough existence in an isolated community, it is also of a piece with the author’s larger vision of a world in which “everything is just eating everything” and despair is never more than a hair’s breadth away.

After Herring mutilates his living room floor (the reason for doing this is unclear even to him; it might have been “in a fit of rage, or perhaps a fit of idleness”), his wife, Euna, leaves him and he is forced to re-evaluate his situation, most especially his relationship with his family and his boon companion, Gerry. Gerry’s teeth are “rotten” and have mostly fallen out – another metaphor indicating the decrepitude of the novel’s characters and their surroundings.

From its title on down, Some Hellish is a sombre offering, one made all the more so by the deliberate pace with which Herring (both character and author) unfolds his story. There is incident in the novel – a vicious car crash on black ice in late winter; a storm at sea that tosses Herring overboard to his apparent death – but these sequences unfold in the same laconic, matter-of-fact prose as the rest of the novel, rendering them less effective than they might otherwise have been. (The storm scene in particular is so brief and glancing that it’s easy to almost miss it on the page.)

There are flashes of humour in the book, most arising from the well-wrought local argot, and these do help leaven the general sense of angst and foreboding. Nicholas Herring’s novel deals with big subjects – the vicissitudes of life among Atlantic fishers, as well as suicide, morality, and God – but does so in a style that, in dramatizing the monotony of its characters’ lives, risks caving in to monotony itself. It never does so altogether, but the unremarkable grimness and struggle the people in the book endure may prove to be too much for some readers to bear.