Song for the Snow 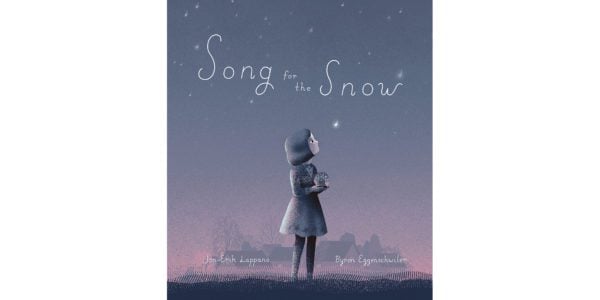 In the bio that appears in Jon-Erik Lappano’s first picture book, the sly and gorgeous Tokyo Digs a Garden, the term “environmentalist” comes before “storyteller.” This makes sense with respect to his Governor General’s Literary Award–winning debut, which spins a tale of nature retaking our built-up human spaces in a kind of fabulistic version of Alan Weisman’s The World without Us.

What’s great about Lappano’s work is how he merges environmentalism and storytelling in a way that is subtle, enchanting, and not at all didactic. Instead of apocalyptic gloom and drowning polar bears, the Guelph-based creator focuses on joy – specifically the joys of the natural world we are in danger of losing.

Song for the Snow is even more subtle and enchanting than Lappano’s previous books. In it, a young girl named Freya laments the lack of snow in her town, which has gone without for the previous two years. This absence bums Freya out until she is gifted with a snow globe that plays a melody with the power to call back the white stuff. Freya plays the tune over and over again. Soon, people in town start to hum it too, until finally, “a single, lonely snowflake drifted into town. And another, and another, until the sky was completely filled with snow.”

The simplicity of Lappano’s story, and the gentleness of the tone in which it is told, is matched by Calgary artist Byron Eggenschwiler’s images, which employ a colour palette composed predominantly of pale greens, browns, and purples. Snowflakes, stars, and musical notes seem to shimmer on the page.

Song for the Snow has the feel of a classic fable – almost to a fault: modern Canadian kids might struggle to see themselves in Freya’s cozy European-style market town. And the idea that environmental problems can be solved through collective good vibes might not work for parents and educators looking for books with a greater sense of eco-urgency. But taken on its own terms, Lappano and Eggenschwiler’s tale is as quietly charming as the first snowfall of winter.