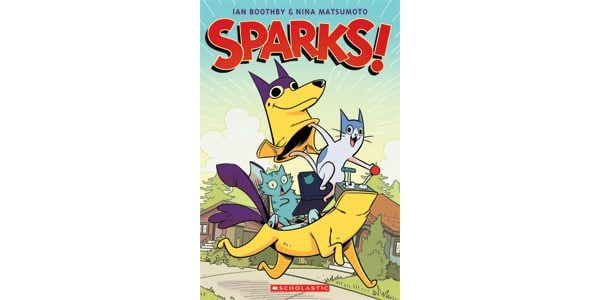 August and Charlie are two cats who meet as fellow prisoners in a secret animal testing laboratory, and later live together in a house with a sentient robot that also serves as a kitty litter box. After foiling a neighbourhood robbery, the cats get a taste for heroism, so they build themselves a mechanical dog suit they control from within. Their exploits catch the attention of a baby girl named Princess, who is in fact an evil alien trying to gain control of all Earth’s animals.

Ian Boothby and Nina Matsumoto first worked together a decade ago on a Simpsons comic book that won them an Eisner Award. They’ve collaborated on many projects since, including Deadbeat Dad and Sneaky Dragon. But Sparks! – a graphic novel for young readers – sees them return to that Simpsons-esque sensibility.

Boothby keeps a lot of narrative plates spinning without breaking a single one. Matsumoto’s bright, dynamic, and cartoonish illustrations, though vaguely reminiscent of a certain show about a dysfunctional Springfield family, are a perfect fit with the text.

Sparks! is filled with gags that might only be appreciated by older kids – or even adults. The shifts in time and the sheer manic pace of the narrative might also be too much for very young readers to keep up with, though the frequent poop and pee jokes will make them want to try.

For all its silliness, the book also takes a few surprisingly dark turns. Though we are spared scenes of actual animal torture, it is made clear that the animals in the lab are repeatedly abused. In one panel, Charlie holds up a red, swollen paw and explains that “They hurt my foot to see how fast I heal.” But for readers who can handle a bit of grit with their goofiness, Sparks! is comic-book catnip.