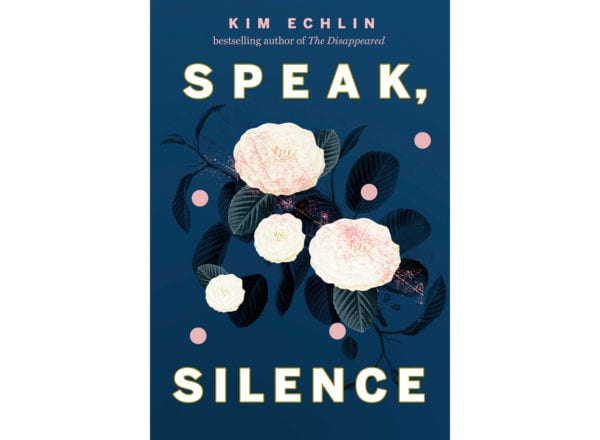 In May 1993, the United Nations established the International Criminal Tribunal for the Former Yugoslavia (ICTY), in response to the horrendous crimes perpetrated against civilians during the region’s conflicts in the 1990s. The tribunal’s objective was “to try those individuals most responsible for appalling acts such as murder, torture, rape, enslavement, destruction of property, and other crimes.” By the end of ICTY’s mandate 24 years later, 161 individuals had been brought to justice.

In her latest novel, Giller-shortlisted author Kim Echlin focuses on one landmark trial in 2000, which established that the use of rape as a weapon of war was not just a crime against an individual but a crime against humanity.

Set in 1999, Speak, Silence follows Toronto journalist Gota Dobson as she becomes increasingly agitated by the violence in the former Yugoslavia, which she sees on the news and reads about in the paper. Gota convinces the editor of the travel magazine she frequently writes for that she should go to Sarajevo to cover a film festival that is improbably happening in the midst of ongoing fighting just outside the city.

Her purpose is twofold. She is restless and feels the need to do something in response to the conflicts. Alongside articles about the film festival, she chronicles the situation from within Sarajevo, posting dispatches that get slotted into the back of the travel magazine under a pseudonym. How this small channel is expected to reach a larger audience and raise not simply awareness but a more powerful response from a largely disengaged Canadian populace is not made clear. But as she explains to her editor, her hope is “only to know. To tell.”

Though this desire to tell is one purpose, her other is to track down Kosmos, the father of her child, whom she has not seen since he left her after a brief affair when they were both in Paris 11 years ago. She was then a young woman in search of adventure and purpose; he was a not-as-young man intent on writing plays rooted in his Bosnian heritage who was in love not with Gota but with a married woman.

That woman, Edina, becomes an elemental figure in Gota’s life when Kosmos turns up to meet her at a café with Edina. A lawyer and survivor of sexual, psychological, and physical abuse at the hands of the Bosnian Serb militants who took over her town of Foča early in the conflicts, Edina is working with ICTY to record statements from other women like her, who were brutalized in unspeakable ways; who watched their husbands, brothers, and fathers shot or shipped off to labour camps; who endured abuse at the hands of men who were once neighbours; and who survived to tell their stories.

Through Edina, Gota (and readers) learn how horrific the situation for the women of Foča was. The fictional accounts are based on the actual testimonies of victims who spoke to ICTY during the six years of preparation leading up to the 2000 trial at The Hague. Though Echlin insulates the reader from bearing the full force of these stories under the guise of fiction, she also makes it clear that these things really happened; this is not the stuff of imagined worst nightmares but the reality of an ancient tradition of women being treated as spoils of war. Her writing is at its most powerful in these moments, her anger couched in terms of brutality.

Balancing this harsh message, Echlin weaves the story of Gota and Kosmos throughout the narrative. Though theirs is an imperfect romance, the tenderness between them and Gota’s obviously deep feelings for the unreliable playwright are a balm against the abrasiveness of scenes describing or depicting the experiences of the women of Foča. Their lovemaking is grounded in consent, mutual affection, and pleasure – a welcome respite from the darker sexual themes inherent in the short novel.

But perhaps “novel” is an imperfect categorization for Speak, Silence. The story of Gota and Kosmos, rooted in the tried-and-true device of a love triangle, is a comfortably familiar ribbon of fiction in the book. The story of Edina and the women she represents, the experiences she describes, and the testimony of the other victims in scenes set during the trial, however, feels far more like reportage. The result is an incredibly forceful book that insists readers sit up and pay attention; despite the gains made with the Foča trial, most of us continue to turn a blind eye to abuses taking place around the world. With her latest work, Echlin demands more of us.