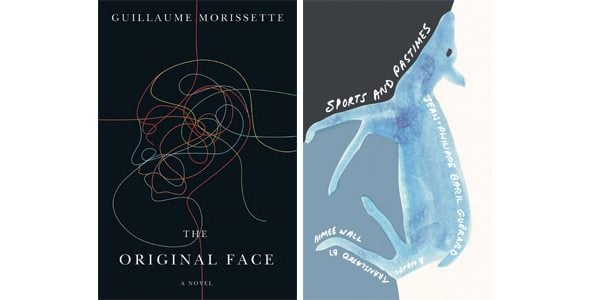 A lot has been written about millennials, a generation that has supposedly forsaken home ownership, careerism, and casual sex in favour of social media and bespoke underwear. A cohort of entitled, lazy, disinterested narcissists who prioritize creativity and social justice above material wealth, theirs is an evolving generational stereotype that truly contains multitudes.

Daniel Kerry, the self-conscious 29-year-old narrator of The Original Face eats whatever he can afford to buy (or, occasionally, steal) from the supermarket. He no longer speaks to his parents. And he’s not overly concerned with whether or not he’ll have children or own a home in the near future, because both are inconceivable given his current occupation: doing freelance design work for a pittance so he can devote the bulk of his energy to creating “post-internet” video art.

“I often felt like some of my best friends were websites,” Daniel says early on, with a characteristic dryness that could – but should not – be taken for irony. The digital world seems real enough to Daniel, and he uses it to describe his physical surroundings: an ungainly cat runs “in an unintentionally funny, animated GIF-like manner”; MDMA makes orienting oneself “choppy and more difficult, as if reality was now a high-definition video game running on outdated hardware.”

While it isn’t always deployed with the utmost subtlety, the reality/digital motif is true to Daniel’s internet-saturated experience of the world, and thereby reinforces the book’s broader concern with authenticity. Daniel creates video art by modifying 3D video games to generate glitches, which he sees not as flaws but “special occurrences.” These brief flashes of unanticipated behaviour – or authenticity – are a respite from a world where artificiality is necessary for survival. Daniel is never paid for exhibiting his art, but he is able to land a steady paycheque by pretending to embrace a tech start-up’s utopian ethos, or reading an automated script convincingly enough to sell strangers irredeemable insurance packages.

The narration has all the poetry and awkwardness of informal speech. Montreal author Morissette is funny and inventive, and the novel contains countless memorable lines. However, it’s hard to care much about Daniel’s problems when he himself doesn’t seem very troubled by them. His disinterest in becoming a traditional grown-up translates into a novel that doesn’t conform to the “coherent, movie-like narrative that real life rarely has.” The result is a book that is highly readable but rarely immersive, and feels more like a side-scroller than a first-person game.

Far from Daniel on the millennial spectrum is the unnamed narrator of Sports and Pastimes, the latest novel by Montreal’s Jean-Philippe Baril Guérard, which was originally published in French in 2014. Having spent her teenage years co-starring on a popular kids’ show, Guérard’s twentysomething narrator has more wealth, acting credits, and jadedness than most people accumulate in a lifetime.

Staged photo-ops punctuate this breathless sequence of indulgence and activity. For the many online followers she both caters to and pities, she curates a social media timeline featuring photos of artisanal cocktails and toned bodies, while not mentioning puking by the side of the road and the sexual frustration she suffers at the hands of men who’ve been rendered impotent by drugs and alcohol.

Guérard’s short sentences (in Aimee Wall’s translation) turn on a dime, crisply characterizing both the shallow, rich youth who move in these circles and the narrator, who loves to hate them: “Estelle is crazy and a little empty inside. I like her a lot.” The prose style reflects the narrator’s need to perpetually distract herself from how empty her life really is.

While a baseline self-awareness and self-loathing keeps her vanity from becoming cartoonish or villainous, sometimes the narrator is too self-aware, as if she realizes she’s a character in a book: “We despise people who go to the gym. You can’t go to the gym. You have to be beautiful indirectly, not look like you’re working for it at all costs.”  Is it likely that someone so superficial would so deeply apprehend their own superficiality? Such passages may jar a reader out of an otherwise engaging narrative, unless the reader imagines this is how all millennials really are.