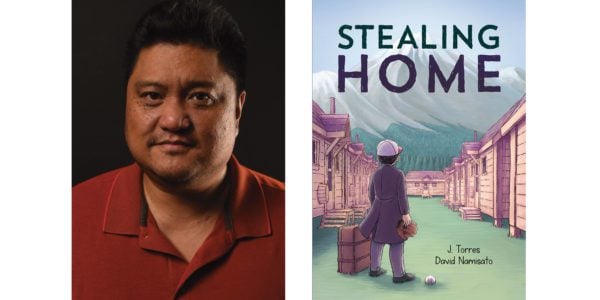 Told from the perspective of Sandy, a young baseball fan whose family is uprooted and transported to an internment camp by the Canadian government after the Japanese attack on Pearl Harbor, Stealing Home shows young readers the dangers of fearing others solely based on their background. As Sandy tries to make sense of his shifting reality, his parents struggle to explain why their family must give up their possessions and leave their house for ghost towns in British Columbia’s remote interior.

The graphic novel begins with Sandy’s love of the Asahi – a Japanese-Canadian baseball team based in Vancouver – and his determination to learn how to play. As the Asahi rise to prominence and Sandy deepens his relationship with his father by playing catch, the Second World War and internment bring an abrupt disruption to both the Asahi and Sandy’s family.

Illustrator David Namisato’s greyscale images communicate the book’s sombre message, and the ubiquitous straight lines portray the stark reality of life for prisoners at the internment camps. The emphasis on the train ride to the camps, forced labour, and widespread disease draws disturbing similarities to Nazi concentration camps and complicates Canada’s national narrative of being a good actor during the Second World War.

Although the book’s brilliance lies in the simplicity of its narrative, the ending offers too great a redemption through baseball and leaves the reader wondering what ultimately happened to the thousands of Japanese-Canadians who ended up in the internment camps. This is a missed opportunity to show the parallel destruction of the Asahi team and Japanese-Canadian communities as a result of internment. Like the Asahi who never again played a game after some of the players were sent to internment camps, many Japanese-Canadian families and communities were also forever changed by the traumatic experience.

In telling this story from Sandy’s perspective, J. Torres offers parents and teachers the chance to discuss racism, discrimination, and belonging with children in a way that is easy to follow. While Stealing Home is harrowing in its depiction of cruelty, it provides hope by showing young readers the dangers of enacting public policy based on fear as well as the importance of staying connected to others in our community.