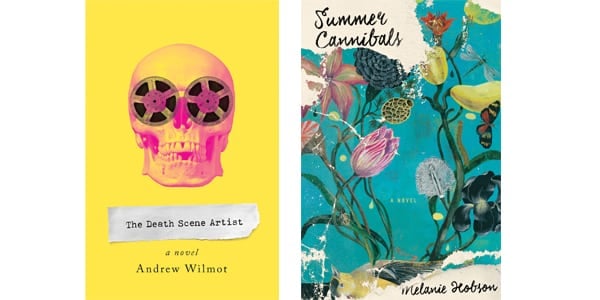 Even the most successful authors have certain (often early) work they’re not proud of: scenes they would deem poorly written or storylines they abandoned, considered unworthy of pursuing to completion. How can a writer sense which stories should remain drawer novels and which are worth fighting to publish? Writerly intuition is one simple answer. And though the debut novels by Andrew Wilmot and Melanie Hobson read in some ways like work that is not fully mature, each also indicates an author in possession of a fully functioning intuition.

In The Death Scene Artist, Wilmot endeavours to epitomize the precarity of physical identity. He does this by way of a first-person narrator, the anonymous M, who recounts a whirlwind romance with the eponymous figure – a film actor who has died in some 300 minor roles. M’s evident unreliability and extraordinary claims are startling, but they do serve as apt, though perhaps unsubtle, metaphors for the narrative’s themes of body dysmorphia and self-loathing. And the titular concept is unique and vividly imagined. (The opening page includes the seductively blunt line, “You died the day we met.”) Additional layers of M’s story are revealed through blog posts and imagined film scenes, and the narrative teasingly suggests that M’s own future may be as short-lived as one of the death-scene artist’s characters (and the love affair itself).

The Death Scene Artist does occasionally announce itself as a first novel. The format of alternating blog posts and film scenes is an intriguing approach in theory but impractical on the page: the blog posts in particular read better as plain first-person narration and contain details and wording not quite believable for the format they claim to take. The public nature of M’s tell-all blog as well as the asides, directed at various characters supposedly keeping up with the posts, feel unnecessary and clunky. Character motivations and plot points are also sometimes made too explicit – as is often the case, less exposition would be preferable.

Though the narrator may come across as maladapted or even mentally ill (some twists at the story’s end – which are fittingly cinematic – reinforce this), the character’s instability and eccentricity are a reflection of the lengths some people are willing to go to in order to change themselves for others. The novel has the tinge of a scandalous revenge story, which adds to its appeal, as does some incisive commentary on the nature of unrequited love and crises of body, gender, and personal identity.

Summer Cannibals deals less with individual identity and more with the bedrock that forms the foundation of that identity: family upbringing. The novel draws the reader in not with an innovative or action-packed concept but with Hobson’s authorial voice. The writing is beautiful and well wrought, evidently flowing from a reservoir of natural talent.

The story follows the pilgrimage of three sisters, all hailing from different locales, to their childhood home in Hamilton, Ontario, following the fifth pregnancy – and subsequent mental breakdown – of Pippa, the youngest sister.

With this scene set, Hobson proves unafraid to render her narrative anything but benign. She delves deep into the chaos and discord all families have at least a bit of at their core. Parental shortcomings are laid bare as the members of the family cling to one another and their beloved family home despite the inherent dysfunction that is the cause for much of their strife in the first place.

Summer Cannibals feels decidedly feminist. Hobson provides the perspectives of the women, each of whom struggles to survive despite old wounds; these characters are contrasted with the family’s narcissistic elderly patriarch, who can’t muster an ounce of consideration for anyone but himself (and the objects of his lurid, objectifying gaze). Sexual yearning ebbs and flows as tensions resulting from extramarital affairs, childhood sexual trauma, long-term sexual violence, and even a suggestion of incest arise. Men’s insatiable appetites – for sex, for glory, for control – and the resulting destruction of the women around them are showcased so brilliantly and intimately that the reader may wish for a break from these sections of the novel.

Though the sprawling home and its meticulous gardens, complete with groups of strangers who tour it to “try to imagine all of this belonging to them,” are ripe with meaning, the single setting does at times feel stifling. Still, there is a reason family dynamics – and the many ways parents can mismanage the responsibility of raising children – has always been a literary mainstay. Summer Cannibals offers a glimpse into the troubling, multi-layered psychologies that make people, life, and literature most fascinating.