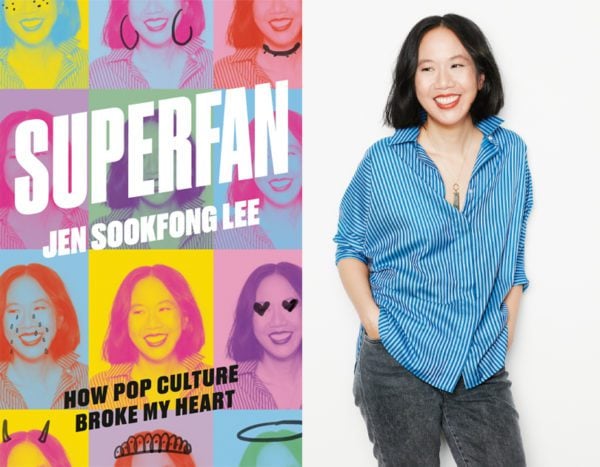 Pop culture is powerful. Our shared experiences can foster a sense of collective belonging, while just as quickly isolate and traumatize. Consider the divisive social and political issues exposed by some of 2022’s biggest cultural moments: Will Smith slapping Chris Rock, Amber Heard’s defamation trial, Ye/Kanye West’s anti-Semitic rants. Even Kim Kardashian being sewn into Marilyn Monroe’s sparkling gown for the Met Gala touches on privilege and body shaming.

What is often forgotten is how the pop culture we quietly consume at home on screen and in print can leave an indelible mark on how we perceive our place in the world. Vancouver author Jen Sookfong Lee’s new memoir-essay collection, Superfan: How Pop Culture Broke My Heart, traces a life surrounded and influenced by pop culture. As the youngest daughter of Chinese immigrants who desired to fit in with her mostly white classmates, Lee found solace in books, movies, and TV shows – but pop culture also fed into an inescapable feeling of otherness. It didn’t matter how she applied her makeup or if she kept up with the sitcom of the day, Lee’s life was filtered through a systematically racist cultural lens with little room for those considered to be outsiders.

Lee punts the outdated notion of high and low culture by giving each work thoughtful literary consideration. Elizabeth Smart’s formidable 1945 prose-poem By Grand Central Station I Sat Down and Wept is treated as an equal to Justin Bieber’s “hurt child story,” all in the same essay. The throughline between Princess Diana’s rebellion, Gwyneth Paltrow’s divorce, and Anne Shirley’s orphanhood is that they all connect back to moments in Lee’s own life, which she recalls with emotional honesty and graceful consideration.

The heartbreaking illness and early death of Lee’s father, her mother’s painful criticism, the devastating trials of divorce, and the subsequent challenges of single parenthood and dating intersect across the essays, as do the inherent challenges of pursuing a creative life. Lee employs her novelistic talents to capture the essence of Rihanna’s “Desperado” beyond its slow groove, with its evocation of “plain highways, gas stations littered with tumbleweeds, a way out of the city that is both exhilarating and terrifying.” Kardashian family matriarch Kris Jenner is described as an alchemist for seeing her children’s talents and limitations. Even the formulaic paintings of halo-haired artist Bob Ross, the subject of many a meme, are given their due.

The fact that Amy Tan’s 1989 blockbuster novel and subsequent film adaptation, The Joy Luck Club, still stands out as a breakthrough representation of Chinese storytelling says as much about Asian representation in mainstream culture as Lee finally discovering a humour-sister in comedian Ali Wong. In an essay about the expectations of “a good Chinese girl” when it comes to storytelling, a Google search for Tan leads to a kick-ass video of the popular author in a razor-cut blond bob and leather sheath dress belting, off-key, Blondie’s “One Way or Another.” In this, and a similar moment performing with the Rock Bottom Remainders (a charity band made up of published authors) where Tan is seen as a person taking up space on stage and in the world, Lee recognizes that there is “more to our stories than what the world has been led to believe.”

By peeling back the layers of her own life as a Chinese Canadian woman willing to defend the pleasures of watching the Kardashians, Lee reveals the complexities of our broader culture and its limitations. Expect that through this book Lee will find her own superfans.