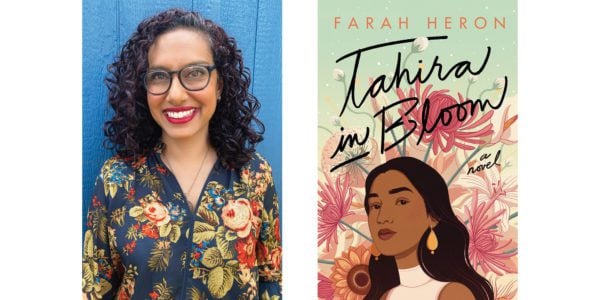 Tahira Janmohammad has a plan: build her social media brand, catch the eye of style influencers, get into New York’s Fashion Institute of Technology, and make her House of Tahira fashion line a reality. When a dive-bombing parakeet cancels Tahira’s dream internship, her mom sends her to the small town of Bakewell, Ontario, to help out her Sharmin Aunty at her dress shop.

Fortunately, the prize for this year’s Bakewell flower sculpture design competition involves meeting a fashion designer who’ll be able to help Tahira get into FIT. There are only two problems: Tahira is allergic to flowers, and Rowan Johnston, whose genius with flowers makes him a competition favourite, hates influencers like her.

Farah Heron’s young-adult debut, Tahira in Bloom, is a sweet and heartwarming romance. Despite an inauspicious meet-cute involving a beautiful mural, vintage boots, and sheep manure, Tahira and Rowan’s relationship is built on mutual respect. They may butt heads in public, but secretly they admire each other’s talent. Even their inevitable eleventh-hour breakup is tempered by the desire to see each other succeed.

Both leads are BIPOC, and their bond forms partly from this shared understanding. Tahira constantly confronts being both “too Muslim” and, as a non-hijabi, “not Muslim enough” for fashion. The Johnstons are one of few Black families in Bakewell, and Rowan’s beloved garden is endangered when an anonymous tip sends cops investigating a potential grow-op.

There’s also a welcome subversion of the “strict Asian parents” trope. With the credo “Janmohammads always succeed,” Tahira’s parents are hyper-focused in their ambition, but crucially it’s directed toward the goals Tahira has set for herself. And when her summer in Bakewell makes Tahira rethink her plans, her parents remain supportive.

Beyond the central romance, Heron’s characters are vivid and wonderfully complex. Fashion designer Nilusha Bhatt is a mentor that anyone would be lucky to have; she encourages Tahira to pursue her dreams but also gives much-needed perspective on what that pursuit will actually entail. One villain’s redemption feels more convenient than organic, while another villain’s karma is cheer-out-loud satisfying. The romance subplot featuring secondary characters is also really sweet; as Tahira’s sister declares, “I ship them.”

Tahira and Rowan are equally shippable. They make each other better both personally and artistically. Heron illustrates this beautifully with their flower sculpture competition design: a fusion of aesthetics that seem contradictory at first but come together into a single stunning whole.