Thanks a Lot, Universe 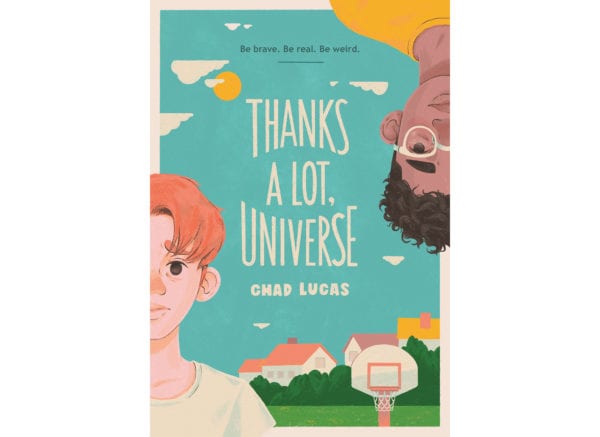 Thanks a Lot, Universe by Chad Lucas is an uplifting celebration of resilience. Packed with big issues – a family split apart, microaggressions perpetuated by supposed friends, social-anxiety-induced panic attacks, and a coming-out narrative – this charming middle grade novel isn’t bogged down by unearned drama thanks to its two multi-dimensional and appealing central characters.

Brian lives with his parents and younger brother in Halifax. He suffers from severe social anxiety and has never made any friends at school, despite being on the basketball team. On the morning of Brian’s 13th birthday, his father, who works in cannabis production and distribution, finds out that the police are after him and takes off, leaving only Brian’s gift and a note for him and his family. The day only gets worse from there when his distraught mother overdoses on pills. Suddenly more alone than ever, Brian struggles to cope as he and his brother are sent to a foster home. He tries to keep his circumstances a secret, and the pressure exacerbates his anxiety.

Ezra, also on the basketball team, seems to have it all – he’s popular, smart, and funny with a close group of friends he’s known forever. But Ezra can’t stop thinking about how much he wants to get to know Brian. His curiosity leads him to uncover Brian’s secret and eventually earn his trust. Their friendship progresses quickly through shared secrets and witty texts, though complications arise when Ezra realizes he has a crush on Brian.

Based on their activities and banter, the characters act slightly older than their ages, but that doesn’t get in the way of this bright and enjoyable story. It’s the sort of book you don’t want to end because there is so much left to experience alongside the characters. The alternating perspectives of Brian and Ezra allow the reader to get to know each boy enough to tug at the heartstrings. Thanks a Lot, Universe is a powerful book for kids as it champions individuality, awkwardness, vulnerability, and unwavering love and friendship.