★The Annual Migration of Clouds 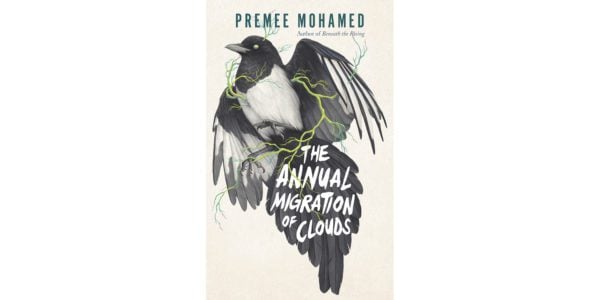 Premee Mohamed imagines a dystopic future in a new novella that is deeply speculative and character driven. Through Mohamed’s breathtaking prose, this post-apocalyptic story unravels meditations on community building, adaptation, and collective survival. The narrative follows Reid, a sharp-witted, self-reflective young woman who grapples with the choice between staying in her community and honouring her commitments there or leaving to accept an unbelievable opportunity to uncover “the last remnants of the old world” at a secret university.

Mohamed impressively condenses vivid, place-specific world-building into the novella. The centre of this universe is a weathered university campus in a snow-covered valley near a river of ice in proximity to sites such as Calgary, Red Deer, and “North Sask.” With frequent landslides, dust storms, and wildfires, the eerie atmosphere, described as “a hot cloth stretched over the face, heavily unmoving,” is both startling and irresistible. Many birds jewel Mohamed’s apocalypse: sparrows, pigeons, chickadees, and magpies are deeply resilient winter survivors that reflect the personality of the people in Reid’s nameless community. As the Thaw approaches – the dawning of spring when everyone has their duties to survive the year – the echoed credo of “we cannot spare anyone” is more palpable than ever for Reid.

Complicating her decision is a more intimate and internal dilemma. Reid lives with a deadly fungal disease called Cadastrulamyces, or Cad for short, that causes involuntary muscle responses and audio-sensorial side effects. Mohamed grants the reader intimate access into Reid’s fractured mindscape by disrupting the narrative with poetic cadence and antagonistic dialogue between her and the Cad.

Struggling with her adult responsibilities, her instincts to venture beyond her known world, and what’s most immediate for her – her agency over her own thoughts – Reid must make decisions when consequences are anything but clear cut.

Throughout the novella, Mohamed’s sharply honed storytelling evokes expansive questions, particularly around inheritance: the hereditary nature of Reid’s illness, her presumed responsibility to her mother and community, and the legacy of a climate-decimated Earth. With keen awareness of their own uncertain future, Reid’s best friend Henryk reflects, “Sometimes you can’t … you can’t build something new while you’re standing in the spot where the old one is.”

In this rich and nuanced universe, Mohamed offers an emotionally fierce and human story that takes the time and space to personalize apocalypse. There are many instances of community care, intentional sharing, and future dreaming in The Annual Migration of Clouds, which invite readers to reflect on the significance of interdependent relationships no matter what future we will find ourselves in.