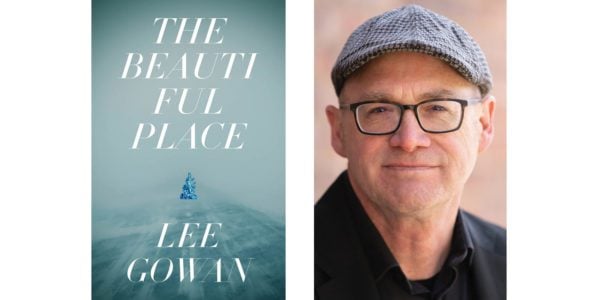 The wry narrator of Margaret Atwood’s short story “Happy Endings” downgrades plot to “just one thing after another, a what and a what and a what.” Well, maybe. But the number of whats and the way they’re ordered and interconnected – that takes a pro.

A masterful and intriguing assemblage of plot elements, Lee Gowan’s The Beautiful Place opens in 2012 with a middle-aged guy taking stock and coming up short. With a humiliating job loss, he’s facing another “terrible failure.” His second marriage is coming undone spectacularly and his petulant daughter has grown up to have caustic opinions about straight white men, along with “selfish and ridiculously expensive fantasies” of attending design school in Manhattan. Nearing his 50th birthday, Gowan’s unnamed narrator surveys a catalogue of past stumbles over and again: a career in cryonics (“selling an immortality that I do not even believe in,” he confides), a faded dream of writing a novel, aspirations to live ethically. His grandfather’s pistol offers him an option: “I put the barrel between my lips, taste the metal and sulphur with my tongue, and pull the trigger. Easy as pie.”

This strangely buoyant novel ends with flight – in the form of a wintry road trip from Ontario to Saskatchewan, complete with the customary familial squabbling and farcical mishaps. There’s also the decidedly non-customary destination of a rented airport hangar that holds human bodies frozen for future resuscitation. The weary travellers seek the head of one man in particular (which is crucially important to an enigmatic client seated in the narrator’s westbound car) and the body of Philip Bentley, a literary name familiar from Sinclair Ross’s slim 1941 novel, As for Me and My House. The narrator of The Beautiful Place happens to be Bentley’s grandson.

A “mostly forgotten provincial figure” and “[k]ind of Group of Sevenish” painter who abandoned his wife, Ross’s grizzled character almost steals the show when Gowan’s likably conflicted narrator meets him in 1986. Gone is Ross’s chilly and withdrawn Prairie minister. In Vancouver’s West End, the elder Bentley describes himself as “constitutionally cranky” and “melt in your mouth rotten”; he can’t stand to look in the mirror but savours wartime memories of London, when male “bottom feeders” went gaga over his priapic endowment.

For Gowan’s questing carload, the looming question isn’t “What went wrong?”; instead, it’s “What’s possible next?” Despite his characters’ assorted flaws, mistakes, and scars, the author displays a visible appreciation for them. We make mistakes and they affect us but do not necessarily define us, the novel suggests. Whether adolescent or past their prime, the characters are handed a period of grace to keep evolving. Gowan even gives the frozen dead a second chance, literally moving them from one state of matter to another.