The Carpenter from Montreal 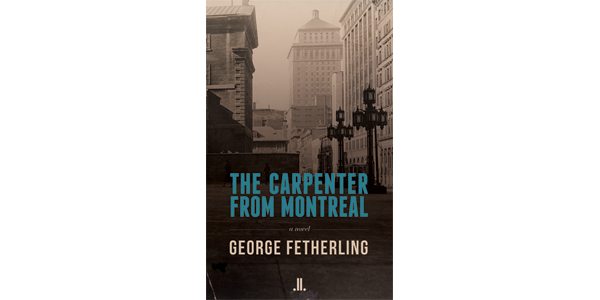 “Am I trying to deal with a crisis I left behind?” wonders Cynthia McConnell near the beginning of George Fetherling’s neo-noir novel. Well might she ask, as she speaks to us from beyond the grave and her death has major repercussions in the lives of the novel’s protagonist, Jim Joseph, and his partner in crime, Pete Sells.

The Carpenter from Montreal follows the rise and fall of Jim and Pete, both children of Lebanese immigrants who have rebranded in pursuit of success. Jim, born Fouad Lahoud, “knew he had to become one of the Americans to prosper as they did.” Pete changed his surname from Nassif “as a precaution” when he went to off to fight in the First World War.

During Prohibition, Jim accepts a proposition to collect an illicit shipment of booze from Montreal and carry it across the border. This profitable experience gives him ideas; before long he and Pete have a thriving liquor business of their own. When Prohibition ends, they turn to gambling, eventually opening a glamorous nightclub and casino, the Mount Royal Club.

The club’s name is a gesture to the city where Jim gets his inspiration. “[E]verything in Montreal pricked his imagination,” we are told. “The city breathed money and coughed it too, discreetly, prudently, but unmistakably. Most everything about it was exciting, and all the rest was merely wonderful. St. Catherine Street made Commerce Street seem like a cowpath. The buildings were far taller, in both height and importance. And one just knew somehow that the stylish women passing on the sidewalks were wearing fine lace underneath.”

The Carpenter from Montreal is full of such evocative descriptions, though it is a better pastiche than a novel. Strong on atmosphere, it lacks both suspense and drama, as if Fetherling deliberately opted out of the propulsive mystery elements of his noir predecessors. Even Cynthia’s murder blends a little too smoothly into the period background: while it affects both Jim and Pete in different ways, it is not a pivot on which anything significant turns. The various narrators sound almost the same, and there is no real justification or payoff for the device of Cynthia’s ghostly presence.

Instead of probing moral grey areas in the unsparing and philosophical style of Hammett or Chandler, Fetherling gives us a picturesque but largely unrevealing look at a world that came and went.