The Case of the Murderous Dr. Cream: The Hunt for a Victorian Era Serial Killer 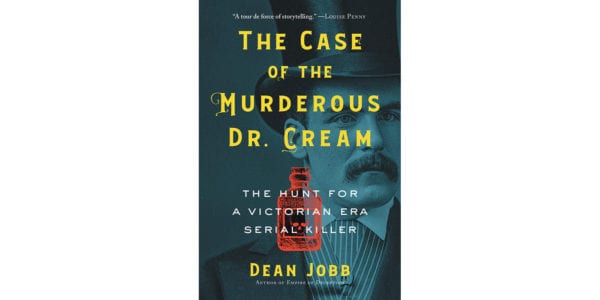 Thomas Neill Cream’s early life was uneventful – born in Scotland in 1850 and raised in Quebec City – and he progressed through medical school at McGill and in Great Britain; he then worked in London, Ontario; Chicago; and London, England. But behind that respectable facade of a doctor, Cream was a notorious serial killer. The Case of the Murderous Dr. Cream is a detailed retelling of his crimes and the police’s attempts to catch him.

Dean Jobb, author of the Arthur Ellis Award–winning Empire of Deception, includes a good walkthrough of Victorian-era murder mysteries, how well Cream’s true-crime story fit that genre, and thus how his trial became a media sensation. Cream’s profession added to the scandal, as he was adept at using his status to “overcome any suspicion of wrongdoing.” And the story of the Lambeth Poisoner (as he was also known) has retained its popularity over the decades thanks to the unfounded rumour that Cream confessed to being Jack the Ripper.

Cream’s victims were almost all women, mostly sex workers or unmarried women seeking abortions, so the historical record of their lives is often lacking. One of the most striking features of Cream’s story, and of the Victorian era in general, is how dangerous it was to be a woman who was not deemed “respectable.” The thoroughness of a police investigation was dictated by the perception of a victim’s character; many were declared to have died by suicide or substance abuse even when evidence pointed to foul play. Cream used this to his advantage. Sadly, the lack of detail about their lives means the women are somewhat indistinguishable from one another in the book, and the effect is the further devaluation of their lives.

The Case of the Murderous Dr. Cream does not follow a typical chronology. It starts with Cream’s release from jail in Illinois in 1891. It is only through the police investigation for his 1892 trial in London, England, that we learn about the deaths in which he was implicated before he crossed the Atlantic. This structure is interesting initially, as the reader wants to know more about the killer’s background. However, Cream’s trial and execution, which should be the climax of the story, fall somewhat flat as the key details have already been revealed.

Unfortunately, Jobb is not able to provide satisfying answers to the question of why Cream became a serial killer beyond tantalizing clues about an unappetizing side to his personality – Cream’s sister-in-law refused to allow him into her home and several acquaintances mention concerns about his mental state. Jobb refers to Cream’s “belief that prostitutes were a scourge and must be eliminated” but provides no suggestions as to how that contempt evolved into murder. The Case of the Murderous Dr. Cream is an entertaining read, but it does not provide new information on how someone so “normal” could choose such a horrifying path.