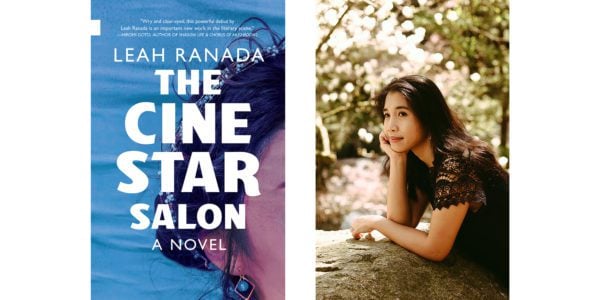 Upon entering the world of The Cine Star Salon – Leah Ranada’s dazzling debut novel – the reader is introduced to Sophia, a Philippines-born Vancouverite, as she attempts to balance the books of her newly acquired hair salon, bridge the gap emerging between her and her fiancé, Adrian, and improve her strained relationship with her parents, who still hold out hope that Sophia will abandon her career as a beautician in favour of business school.

We first meet Sophia at a busy Chinese restaurant, where she is reluctantly taking part in Sunday dim sum with her family as her mother gossips about events back in the Philippines. It seems that Auntie Rosy, owner of the Cine Star Salon in Manila, might lose the very salon that inspired Sophia to open her own. The news triggers happy memories for Sophia, but also memories of the sometimes difficult relationship with her auntie. Sophia eventually decides to travel to Manila, back to the Cine Star, to try to help Auntie Rosy with her latest crisis.

While Sophia is a complicated protagonist, Ranada’s ability to bring settings to life really shines in this novel. She evocatively conjures up the cool, rain-spattered streets of Vancouver, the hot, bustling markets of Manila, the terse silences of Sophia’s parents’ house, and the lively sounds of snipping scissors, whirring hair dryers, and buzzing gossip that fill the Cine Star Salon.

Being an immigrant, or a child of immigrants, is an experience that Ranada captures in all its complexity. In the parallels between the lives of Sophia and her Auntie Rosy, and through the conversations of the two women, Ranada illustrates the guilt emigrants often feel about not being physically present for loved ones back home and for having escaped to a “better” life. The relationship between Sophia and her parents reflects the cultural fissures within families that can create physical distance. And, through Sophia’s interior dialogue, Ranada conveys the conundrum for many immigrant children, regardless of their generation: whether to pursue their dreams or to follow the (often narrow) path to “success” in order to justify the sacrifices their parents made to give them a better life.

The Cine Star Salon engages with the often overlooked inner lives of service workers and immigrants – identities that frequently intersect – to explore the question: how much of ourselves do we owe to our loved ones versus what we want and owe to ourselves? Though Sophia’s answer may not satisfy all readers, her journey is an engrossing tale that provides an intriguing perspective on this common experience.