The Dictionary of Animal Languages 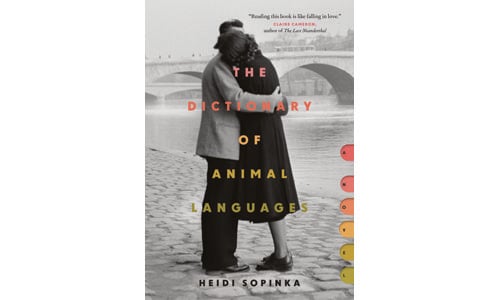 About a third of the way into Heidi Sopinka’s debut novel, the author describes a painting her protagonist, an artist named Ivory Frame, executes while still a student:

There is a group of gluttonous grotesque women, with heads … described as phallic though I thought of them as equine. They sit at a table, abundant with extravagant dishes. It is all writhing and moving and somewhat alive. There is a woman alone, with a neutral expression on her face. She is off in the corner of the painting and appears to be unaware that her fork has dug into a plump, live baby.

The final detail is startling – arguably even more so given the realization that Sopinka is describing an actual work of 20th-century art. The work in question is La comida de Lord Candlestick, a 1938 oil on canvas by the noted English surrealist Leonora Carrington.

Carrington is a clear inspiration for Sopinka’s central character. Both were born in 1917, and Frame is 92 years old in the novel’s narrative present – the same age as Carrington when Sopinka tracked down the reclusive artist in Mexico City and sat with her for two days, from which experience she produced an interview (published in 2012, the year following Carrington’s death) for The Believer. The opening question in that interview (“What are you thinking about right now?”) elicits the response, “I don’t discuss that,” which closely echoes a line Sopinka puts in the mouth of Lev Volkov, the Russian expat who becomes Frame’s lifelong romantic obsession. Lev himself is a loose stand-in for Max Ernst, a married painter who lived with Carrington in Paris until he was captured and imprisoned by the Nazis during the Second World War.

Other details from Carrington’s life and work pepper Sopinka’s novel. Frame’s “reverence for nature and animals,” we are told, “borders on mystical,” a clear resonance with Carrington’s body of work. And Frame is said to have gone mad, which also chimes with Carrington’s life story (during the war, she was incarcerated in a mental institution, an experience she expounds on in her memoir, Down Below, first published in 1944).

But Sopinka also branches out from the biographical record, giving Frame an equal interest in science that spurs her major postwar endeavour: a dictionary of the “languages” spoken by a wide range of fauna, from nightingales to bees to horses to whales. “I am obsessed with language obsolescence,” Frame says as an explanation for her motivation, which is expanded in a series of questions that prompt her work: “What is communication? What is silence? Can animal vocalizations and their meanings be made into a dictionary? … How should listening be translated?”

Undergirding all of these, of course, is the ontological question of existence itself: who are we and how do we know ourselves? And, more pressingly, how do we communicate this knowledge to others?

These are heady questions, and Sopinka appears to have found a provocative entry into them: as the novel opens, the 92-year-old Frame divulges to her companion, Skeet, that she has received a letter informing her she has a granddaughter. This revelation – which is shocking to the old woman who has never married and has no apparent family to speak of – is the central factor precipitating a journey into memory. The reader is offered her experience learning art at the academy of M. Marant, her friendship with a member of the Parisian avant-garde named Tacita, and – above all else – her yearning, aching desire for Lev.

Unfortunately, these dramatic elements are subsumed by a prose style that tries too hard, shows too little, and tends to have an alienating effect on the reader. In Sopinka’s novel, night “jewels in.” Lev’s hand “detains” Frame’s ankle. The “world drops away” and Frame is “filled with these sonorities, this opalescence.” This kind of romantic overwriting reaches its apogee late in the novel when Frame hears laundry flapping in the wind: “The sound reminds me of Lev saying listen to nothing but the sound of your own heart beating when there is the nuptial flight of turtledoves high and circling, the whipcrack of their downward-flicked wings against the grey sky.”

At the other end of the spectrum, we are offered a series of pithy aphorisms (“Time does not heal, it medicates”; “Age makes you sensitive as a Geiger counter”) and anodyne observations (“Isn’t the very definition of insanity repeating the same thing over and over again in the same way, expecting a different result”). These are embedded in a narrative that refuses to allow itself the luxury of forward momentum, instead becoming bogged down in rumination and self-conscious intellectualizing.

This languid quality is exacerbated by another aspect, one that is somewhat surprising in a novel that derives so much stimulus from Leonora Carrington’s life and work. Though Carrington’s imaginative output – and most especially her short stories – could be remarkably funny, The Dictionary of Animal Languages is almost entirely devoid of humour. It is as though Sopinka feels that the only appropriate approach to her themes – love, art, aging, existence – is to adopt and maintain a pose of artificial high seriousness. Looking at Lord Candlestick, or reading Carrington’s story “The Debutante,” one is initially shocked by the content, then moved to guffaw at the absurdity of its presentation. In Sopinka’s version, the heightened prose and relative lack of dramatic incident tend to preclude either of these reactions.