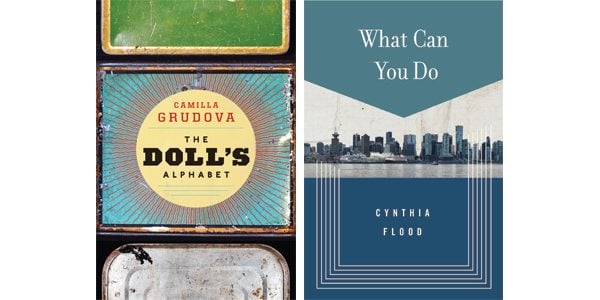 Two new short-fiction collections – one by a first-time author, the other by a veteran – each examine the life experiences and inner worlds of a range of characters, but in radically different ways. In her debut collection, The Doll’s Alphabet, Toronto native Camilla Grudova blends the familiar and the fantastic in stories about the lives of women. And mermaids. And ornamental candlestick holders. And in her fifth collection, What Can You Do, Vancouver’s Cynthia Flood offers brief moments of distress, desire, anger, and reconciliation in the lives of characters who range from morally conflicted parents to mentally distressed leftist organizers.

The opening sentence of “Unstitching,” the first story in The Doll’s Alphabet, sets the expectation that anything might happen within the slender book’s pages: “One afternoon, after finishing a cup of coffee in her living room, Greta discovered how to unstitch herself. Her clothes, skin, and hair fell from her like the peeled rind of a fruit, and her true body stepped out.”

The 13 stories in The Doll’s Alphabet are stylistically distinct, but they are all uncannily unplaceable in terms of their precise setting, and full of familiar elements that are juxtaposed in mysterious ways. One story mentions a gramophone, the next references Siouxsie Sioux. Are we in this century or the previous one, postwar or pre–Industrial Revolution, London or Warsaw? The answers are ultimately immaterial. Through language and storytelling that are consistently refreshing and unique, Grudova has created a fascinating, thematically and materially consistent universe.

The book’s longest story, “Waxy,” about a misfit couple’s secret baby, is dystopian in the vein of Margaret Atwood. It’s followed by the title story, the book’s shortest. At only 50 characters, its brevity and mysteriousness recalls Lydia Davis.

The Doll’s Alphabet is inventive while remaining accessible. Grudova’s descriptions, particularly of her characters, are original and frequently amusing. Consider the antique-store proprietor in “The Sad Tale of the Sconce”: “The owner of the shop was covered with fleas. He looked like a very small lamb, with glasses.”

Grudova explores female subjectivity via surreal plot turns that are perverse and often hilarious. In “The Mouse Queen,” a Latin tutor puzzles over the loss of control she faces when her twins are sent to daycare: “Once, as I read them Aesop’s Fables translated into Latin, one of them yelled ‘Batman’ at me.” Before long, the woman turns into a wolf and eats them both. Each of this book’s stories features plot developments that are entertaining, evocative, witty, and utterly unexpected.

Conversely, the stories in Journey Prize winner Flood’s What Can You Do are characterized less by what happens than by what does not. Her prose style is terse and efficient. The majority of the book’s 12 stories tend toward vignette, eschewing significant dramatic action in favour of interiority and emotional revelation. In the title story, a married couple returns to the campground they last visited a dozen years prior with their children. Not much happens, other than a minor robbery from their tent, but the trip triggers a complex set of emotions and memories for husband and wife alike.

Flood’s clipped writing is frequently effective in conveying mood, as in the claustrophobic and affecting “Struggle.” Aging activist Nora possesses decades of experience fighting for progressive causes, but battles paranoid delusions and fights to maintain the respect of her peers as her mental illness becomes more apparent: “They want to Disable me, put me inside.”

But the brevity can lead to a certain homogeneity of voice, with several of the protagonists sounding like the same person. Stylistic quirks that recur in different stories contribute to this lack of differentiation. For instance, in “What Can You Do,” “swallows darted dipped swerved,” while in “History Lesson(s),” “Myrna’s still thin plain pushy.”

And the lack of dramatic action can leave a reader wanting, particularly in the shortest stories. The plot of “Calm” could be summarized as follows: a boy gets out of bed and goes for a walk, following the trail of four police officers on horseback. Then he goes back to bed. In “Dog and Sheep,” the story’s most significant dramatic action – a violent attack on the titular ewe – isn’t even described as it occurs, but is stumbled upon after the fact.

When Flood bucks her own general impulses regarding plot and language, wonderful things can happen. In “Wing Nut,” mother Moira worries that her young son has developed a friendship with a pedophile recently arrested for attempting to abduct a kindergarten child. The son, Peter, initially admits to a relationship but then goes silent. Over an extended period of time, Moira tries to uncover the truth, talking to her husband, another mother, Peter’s teacher, and even the reporter who covered the attempted abduction. Unlike many of the other stories, lots happens in this one, but neither Moira nor the reader can be sure of what is true and what is not. And in this case, the lack of resolution is highly satisfying.