The Elephant on Karlův Bridge 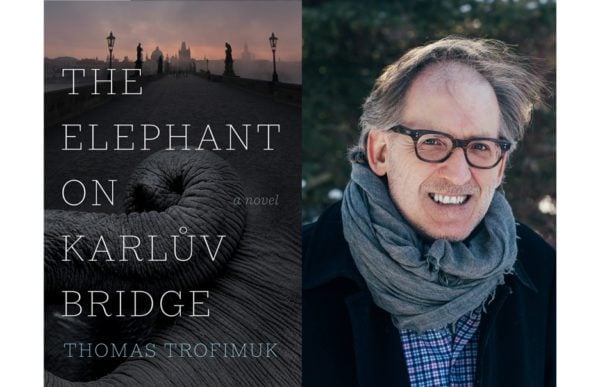 In his latest novel, The Elephant on Karlův Bridge, Thomas Trofimuk imagines the escape of an elephant named Sal from the Prague zoo on an early July morning. The novel follows the elephant through the streets of Prague to the famous Charles Bridge, where Sal causes a reasonable amount of havoc after being provoked by a swarm of bees. The elephant’s journey is a narrative thread from which Trofimuk spins a web of interconnected stories that involve a cast of characters who are related to one another in ways that are both arbitrary and deeply significant.

The reader is first introduced to Marta, a therapist married to the night watchman at the Prague zoo, who tries to convince her husband that the two should start a family. From Marta, we meet her patient Šárka, a ballerina nearing the end of her career, who we follow for a time as she debates her uncertain future with an imagined Anna Pavlova, the late Russian dancer, and struggles to maintain her grasp on reality. Meanwhile, a lighthouse keeper and recovering alcoholic named Mercy staggers through the streets of Prague, reeling with grief after her father’s death and trying to stay sober. Vasha, Marta’s husband, reads aloud to the zoo’s elephants from a copy of Milan Kundera’s The Unbearable Lightness of Being, a text that may have been a source of inspiration for Trofimuk. The narrative continues to expand in this way, collecting characters as it builds to a dramatic final spectacle on the Charles Bridge at dawn.

The story shifts frequently through time, paying particular attention to Sal’s childhood in Zambia, the traumatic journey to Prague, and her eventual escape from the zoo. Though these passages are touching, the dialogue between Sal’s past and the lives of the human characters is somewhat tenuous. In answer to this labyrinthine web of connections, Trofimuk provides a guide: the Charles Bridge itself, which acts as a classical chorus character, guiding the reader through the story. Consistent with his previous novel, This Is All a Lie, Trofimuk doesn’t shy away from literary embellishments and metafictional experimentation. In The Elephant on Karlův Bridge,  he grants the 600-year-old stone structure sentience, and the bridge interrupts throughout the novel to address the reader and comment on the events (the bridge thinks Šárka is “certifiably batshit crazy”). “It is my duty,” the bridge reminds the reader, “to get you safely from one side of the river to the other.”

Though the concept of the bridge as narrator is intriguing, it is unclear, by the novel’s end, whether these passages are entirely necessary, particularly when compared to the compelling lives of Trofimuk’s human characters. At times, the bridge’s tendency to expatiate on the novel’s events detracts from the reading experience by robbing the story of a necessary layer of ambiguity and nuance. Trofimuk’s humans are the novel’s core, and carry the narrative through its distractions. Each character is mired in loss and emotional turmoil and their unique stories of suffering are in themselves a worthwhile exploration of loneliness, desire, and the creation of meaning in a chaotic world.