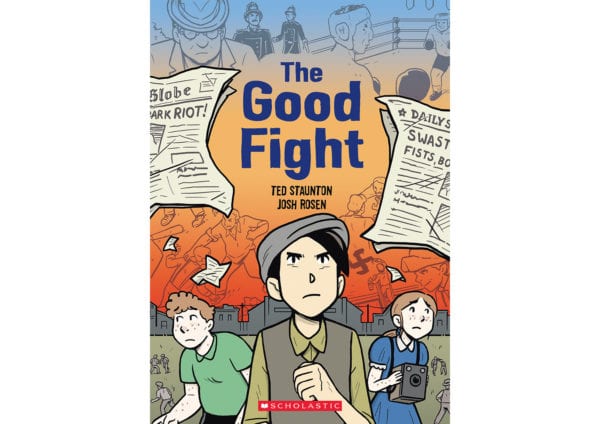 “None is too many.” That was the response of a Canadian official when asked in 1945 how many Jews would be allowed into the country after the Second World War. Anti-Semitism has long been present in this country, and the new graphic novel from award-winning author Ted Staunton and illustrator Josh Rosen takes place in a particularly xenophobic era of our history: the days leading up to the infamous Christie Pits Riot in Toronto.

Set in the summer of 1933 – when Staunton’s grandfather William J. Stewart was mayor of Toronto – The Good Fight follows Sid Klein and his best friend “Plug” Venditelli, both from immigrant families deemed “undesirable” and living in poverty. While Sid’s dad and Plug’s mom secretly organize garment workers to fight for better pay, the boys try to make some cash by selling newspapers and cockroaches, busking for change, and pickpocketing with local no-goodnik Tommy Ryan.

The latter activity lands them in the police station – a visit that ends with the boys reluctantly agreeing to work for the police’s Red Squad during the fateful baseball game at Christie Pits on August 16. Their mission: pickpocket a piece of paper from an alleged communist who’ll be in attendance. (This subplot leaves some unanswered questions.)

As the ballgame ends with St. Peter’s Church winning against the mostly Jewish Harbord Playground team, anti-Semites unfurl a giant banner of a swastika; the thousands who came armed with clubs, lead pipes, and bats begin to riot. Meanwhile, Sid is left to make an important decision when the pickpocketed paper turns out to be a list of names that could put his loved ones in danger.

The Good Fight tackles the plight of immigrants during the Great Depression head-on without glossing over the poverty, unemployment, or ugliness of Swastika Clubs and cries of “Heil Hitler” in a city that has today become one of the most multicultural in the world.

Rosen’s vivid and engaging illustrations add a wonderful sense of time and place. The Good Fight is a solid introduction for young readers to issues of prejudice, loyalty, and the immigrant experience.