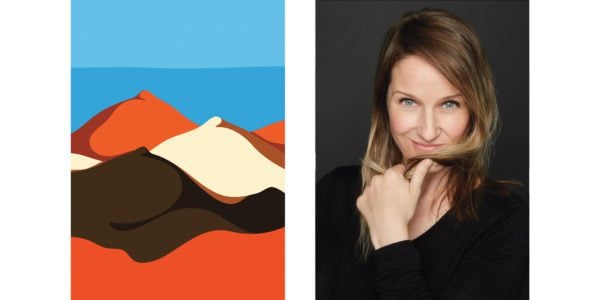 For more than 60 years, girls have lived in peace on the Hill, an island shaped like a girl resting on her side. Sent by the mysterious Colony, they arrive in boats as infants and leave at age 15 after a joyful ceremony. So begins Ali Bryan’s The Hill, an intriguing kickoff to a gritty dystopian series with a feminist spin from progressive publisher Dottir Press.

The Hill, like many fictional dystopias, features rigid group divisions, with the girls being sorted into Mothers, Hunters, Foragers, Collectors, and Suppliers. Refreshingly, there’s no sense of tribalism among the girls in their roles (though any parent reading will feel sympathy for the Mothers, assigned to raise the endless supply of babies). Instead, the girls live in peace, which is an interesting comment all on its own (perhaps Lady of the Flies would have turned out just fine). But when Wren is promoted to Head Girl and she realizes a girl has gone missing, that peace is shattered.

There’s a slight lag in the action after Wren’s discovery, but once things heat up again, it’s non-stop drama to the very end. Fights, fires, and unexpected allies abound, but most importantly, Wren and the girls learn they haven’t been told the whole story about the Hill, which, given the thematic landscape, brings up questions regarding consent and autonomy.

Explanations feel a bit jumbled at times, only because the reader is discovering information alongside Wren. And Bryan is clearly playing the long game, as this first volume serves to set the stage and introduce relationships that will play out over the series.

Any shakiness in pacing and world building is made up for in characterization. Wren is not a perfect leader, but she is tough, brave, and good-hearted. She’s a real teen, and the relationships Bryan weaves for her ring true. The promise of her character and Bryan’s clean, strong prose make this a series to follow closely. The feminist perspective is a fascinating hook, and Wren provides the emotional resonance.