The Hunter and the Old Woman 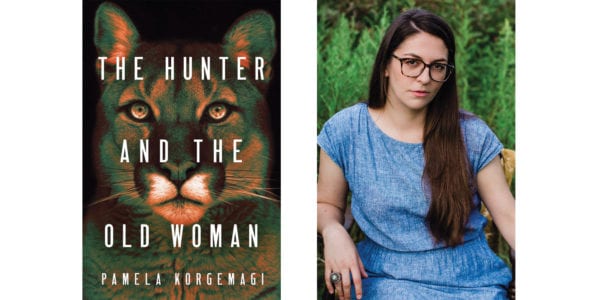 Where is the line between human and animal, and what happens when that line is blurred – or crossed? In Pamela Korgemagi’s verdant and eerie debut novel, that question is put to the readers over and over again, and while no answer is made entirely clear, we are drawn farther and farther into the deep, dark forest that Korgemagi unspools for us.

The Cougar prowls the woods, sleek and curious. Through her, we see the intricacies and peculiarities of season after season, year after year. We become privy to the beauty and the wretchedness, the wins and losses of an existence hard-lived, and the anguish of the circle of life. Weighed against the Cougar’s nuance, the Hunter, Joseph, is a blunt instrument, bulling his way through life. In him, the human form pales in comparison with the animal world.

That human-animal line becomes blurred in the Cougar, who is mythologized as the Old Woman, a fabled predator who has supposedly attacked the village for decades; she makes humans desperately uncomfortable and drives them to frightened extremes. Is the Old Woman ageless, a folkloric villain? Or is she one of a series of animals forced into the realm of people? And what happens when the two spheres – the female form of the wilderness, full of grace, and the male form of industrialization, full of rage – meet?

The result is a final battle that feels also like an act of love, a scene where Korgemagi’s writing shines the most brilliantly. The Hunter and the Old Woman meet as two animals for a stripped-down last dance.

This would have been an excellent place to end the book, but the novel is also about the inexorable march of time. The story moves from the woods to a town in no particular place, in no particular year; from blacksmithing to automobiles, from a cabin to a main street, to air-conditioning, a suburb, domestication. And Joseph’s final act, as slow and dull as it is, is still more anguish in the cycle of life.

Korgemagi’s writing is circular; it loops into itself like a pacing animal. At times, it’s straightforward and easy, focused on the physical environment, reminiscent of The Bear by Andrew Krivak. At other times, it’s lacy and luxuriant, frilled with dark, like something out of William Faulkner’s Big Woods.

Gentle and distressing, soothing and fierce, and a look forward and backward simultaneously, Korgemagi takes the readers into a feral, changing realm that is cruelly no longer available to most. In this time of pandemic, with so many of us cooped up in concrete, some days unable or unwilling to leave our homes, The Hunter and the Old Woman opens up a green, green world.