The Ice Chips and the Magical Rink 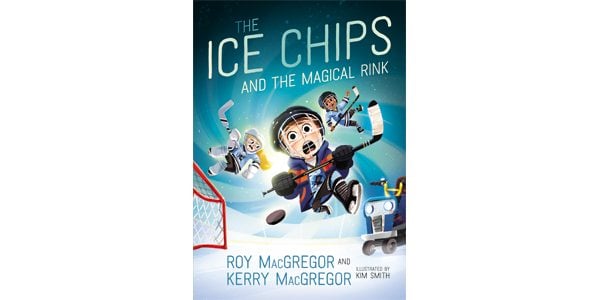 Best friends Lucas, Edge, Swift, and Crunch are huge hockey fans whose beloved local skating rink might shut down because of equipment problems. They take what they think will be their last skate at the beloved arena and discover a magic ice-flooding machine, which transports them back in time.

So begins the first book in the new Ice Chips series, co-written by Screech Owls author Roy MacGregor and his daughter Kerry. In their travels, the friends meet a young Gordie Howe, are treated to history lessons – like what Bennett buggies were – and, once back in the present, face Lars the bully, whom we learn is being bullied by his own mom.

Thanks to the MacGregors’ skills as storytellers, moments of insight and empathy don’t jar or weigh down the story, but are deftly woven into the hometown hockey narrative. There are also elements of diversity: Edge is Sikh, Crunch’s family speaks Spanish, Lucas’s family is in a tough financial spot (so he wears ill-fitting hand-me-down equipment), and Swift is a girl with strong goalie skills who happens to have a partially prosthetic leg.

It’s not surprising how well-crafted the book is given the pedigree of its authors: Roy is the winner of several National Magazine Awards, pens The Globe and Mail’s “This Country” column, and has written over 50 books. Kerry contributed to the Screech Owl series and is a journalist as well.

The time-travel aspect results in a few moments of confusion near the beginning of the book, but The Ice Chips and the Magical Rink gets this new middle-grade series off to a promising and action-packed start. Will the kids save the arena? Will they all make their beloved Riverton Ice Chips team again this season? And how exactly does a homemade Zamboni carry one back to 1936?