★The Lady with the Books: A Story Inspired by the Remarkable Work of Jella Lepman

The majority of Canadian children – though shamefully not all – can take for granted the availability of books at home or in schools and local libraries. Two new picture books, both told from the perspective of children, are set in war-ravaged countries where access to books is anything but a given. The Lady with the Books recounts the story of Jella Lepman’s groundbreaking travelling exhibit of children’s books in post–Second World War Germany. The Library Bus introduces readers to the brave women in contemporary Afghanistan who run mobile schools and libraries to teach young girls and provide them with reading and writing materials.

The Lady with the Books is the slightly darker and more complex of the two, yet also the more whimsical. The world of Anneliese and her little brother, Peter, is grey and rubble-filled, and the reality of loss and hunger is clear. The children are drawn to the unusual exhibition thinking that the lineup may lead to food. But then whole worlds open when they see the unexpected collection of picture books from other countries, in other languages.

The children are introduced, in particular, to the compassionate and strong Pippi Longstocking and to The Story of Ferdinand. The latter – about the bull who prefers to smell the flowers instead of fighting and which was banned by fascist leaders – was translated and distributed by Lepman to tens of thousands of German children after the war. (It was her explicit agenda to introduce the children to literature from the countries with which Germany had been at war.)

Marie Lafrance’s illustrations introduce Ferdinand’s beloved flowers, as well as other figures from the books, via fanciful red-line drawings laid overtop of the grey day-to-day world of the children. In a beautifully illustrated nighttime reckoning with Anneliese’s imagination, she resolves to deal with the broken world around her. 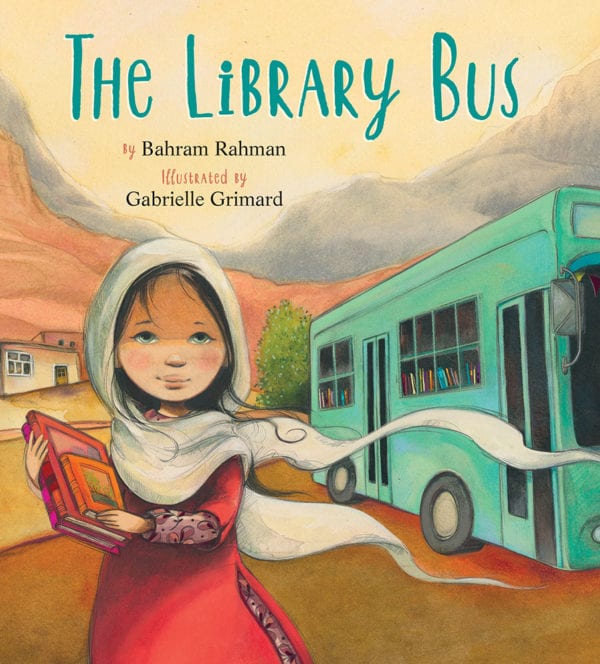 Bahram Rahman’s The Library Bus is inspired by growing up in Afghanistan and by the children he met during visits to orphanages and camps in Kabul. It is Pari’s first day accompanying her mother, as she drives a converted bus to a small village, then to a UN refugee camp. In each place, Pari’s mother gathers the young girls to teach them and provide them books from the well-stocked library on wheels. Pari will be going to school soon and in that way is far luckier than the  girls on the bus route. Pari’s mother explicitly points out that education will make her daughter free.

The dangers and obstacles that still exist for girls getting an education in Afghanistan are not emphasized; Rahman instead refers back to the education of Pari’s mother by her father, which had to be conducted in utter secrecy. In the afterword, the author mentions the inspiration he drew from the real-life children he met. Gabrielle Grimard’s characteristically warm style and her animated representation of Pari and the other children beautifully brings to life the vitality and potential of the girls in the book.

Both these titles speak to the connections made through books and are great teaching tools to gently expose young children to the impacts of war and the influence of books on individual lives. The background information provided by Rahman about growing up in the midst of war in Afghanistan in The Library Bus, and about Lepman’s creation of the International Youth Library and the International Board on Books for Young People (IBBY) in The Lady with the Books are informative resources for parents, teachers, and young readers.