The Late, Great Endlings: Stories of the Last Survivors 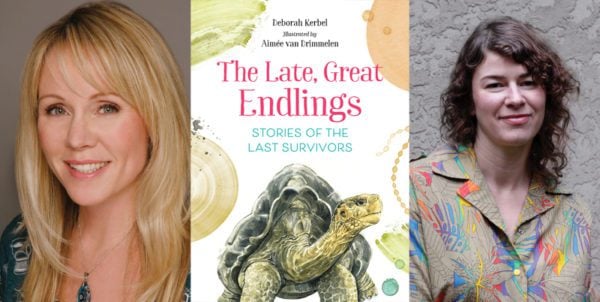 An endling is the last known surviving individual animal of a species. Sadly, as the Earth enters its sixth mass extinction, there are now more than enough endlings to inspire an entire book. The Late, Great Endlings: Stories of the Last Survivors sensitively memorializes some of the world’s more exotic creatures that now serve as “reluctant ambassadors” for their animal ancestors.

Toronto-based author Deborah Kerbel (Before You Were Born, Fred & Marjorie, and Grumble, Yawn) presents climate change and the tragedy of extinction with a tender touch in this nonfiction picture book.

Each endling is introduced with a rhyming poem (well-suited for reading aloud to a class), followed by more complex prose outlining the awful truth of hunting and habitat loss. The last Pinta Island tortoise’s introductory eulogy reads: “Poor 100-year-old Lonesome George. His passing we lament. Did he wonder in those final days where all the others went?” We also learn about the final days of Booming Ben, the last heath hen; Celia, the last Pyrenean ibex; and Turgi, the last Polynesian tree snail, along with four other endlings.

Beautifully illustrated in watercolour by Victoria-based artist Aimée van Drimmelen, The Late, Great Endlings puts a face to the name of some of the world’s more memorable last known survivors. Created based on photos and taxidermic specimens, van Drimmelen’s striking full-page portraits are part hall of fame, part portrait gallery – all surrounded by colourful splashes and swirls that evoke a well-worn field guide or historical notebook.

This juvenile STEM read is best suited for children ages six to eight who can handle the inevitability of life and death, and best presented by an adult guide to help introduce terms like “colonists” and explain “extinct” versus “endangered.” Readers are also given a dose of hope in the form of a list of small daily actions they can take to make meaningful change in the world.

Although written for young animal enthusiasts, The Late, Great Endlings is a thoughtful picture book that should give us all pause as we ponder the interconnectedness of life on Earth.