The Life and Deaths of Frankie D. 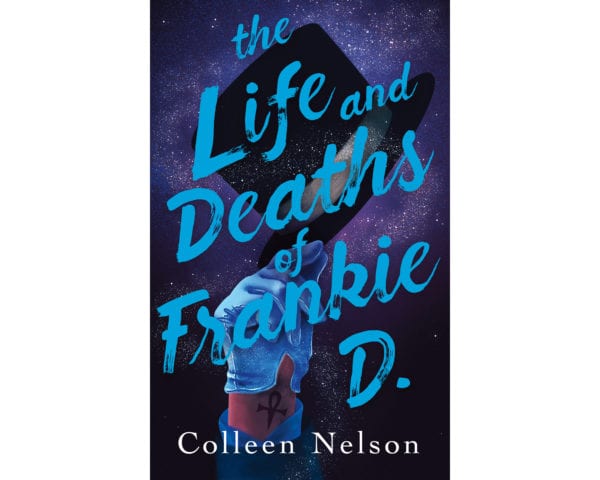 Frankie Doe, the 17-year-old protagonist of Colleen Nelson’s impressive new novel, is a consummate outsider. Found in an alley as a young girl with no memory of her past, she has endured a series of terrible foster homes before coming to live with her dedicated foster mother Kris. Frankie’s history and unusual skin condition – “The clinical name for what I had was lamellar ichthyosis, a rare genetic disorder that gave me skin so scaly it looked reptilian” – keeps her at a distance from everyone. To cope, she hides herself under heavy goth makeup and spends her downtime at school hanging out in the art room.

As if things weren’t hard enough, Frankie begins having dreams in which she is pursued by an old-fashioned circus ringmaster. The dreams escalate until Frankie finds herself in the mind of Frances, a young girl with a similar skin condition who works in a carnival sideshow as “the Alligator Girl.” What is the relationship between Frankie and Frances? Who is the mysterious ringmaster? Are these dreams, memories, or something else? And what of the new boy at school, Gus, who seems to share the same dreams?

The Life and Deaths of Frankie D. is a powerful, genuinely creepy novel rooted in well-developed characters and vivid imaginative leaps. Frankie herself is a carefully rounded creation; her anger and pain mingle with a need for acceptance and an unwillingness to risk further rejection. Her relationships – with her foster mother, her art teacher, and a fellow student – are fragile and fraught, depicted with clear-eyed emotional acuity. Nelson also manages to address significant issues for teens, including bullying and sexual assault. This realism serves as an effective backdrop for Nelson’s imaginative range: it’s a significant risk to build a novel, in part at least, out of an Egyptian mummy’s curse, but Nelson has the skills to make the cliché feel fresh, and she uses them to considerable – and surprising – effect.

The gradually mounting thrills of The Life and Deaths of Frankie D., alongside the slow revelation of the answers to the novel’s questions, make for an immersive and utterly pleasurable read.