The Long Way Home: A Personal History of Nova Scotia 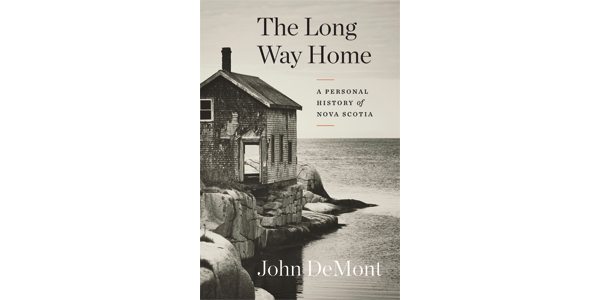 In August 2017, the bitter strike between the Halifax Typographical Union and the city’s newspaper, The Chronicle Herald, ended after 19 lengthy months. The paper’s most beloved journalist, John DeMont, was one of the strikers. The Long Way Home: A Personal History of Nova Scotia was begun before the strike, but themes of labour, mutiny, and adversity seem to yoke together DeMont’s material. While the great men of history get their due, it’s the ordinary folk, the working class, that DeMont really wants to highlight and praise. This comes as no surprise: the author’s previous works of adult non-fiction, The Last Best Place: Lost in the Heart of Nova Scotia and A Good Day’s Work, are tributes to the proletariat.

The Long Way Home traces the arc of Nova Scotia’s history: Samuel de Champlain and the men of the Order of Good Cheer; relations between the French/Acadians and Mi’kmaq; the loyalists and the New England Planters arriving in Shelburne; the Gaelic diaspora; the shipbuilding empires in Yarmouth and beyond. DeMont frames individuals and events in terms of work and achievement, even if the work is privateering, soldiering, or colonializing people and land.

Anyone who stayed awake in high school history class will be familiar with at least some of the events and characters described in these pages. What DeMont does with this well-trod material is render it as a sentimental journey. He uses colloquialisms. He calls a man recounting a story an “old salt,” and repeatedly spins “yarns.” The author walks the old towns and villages – Yarmouth, Barrington, Glace Bay, Canso, Grand-Pré – leaning hard on nostalgia to bring their stories to life. DeMont knows his audience. Nova Scotians are known as friendly, personable folk, earnest and hardscrabble, with a long storytelling tradition. Pedigree, if they have any, is hard won. Thanks to the continual pilgrimage westward to find work, the province’s population is routinely depleted, yet there remains a belief that all those scattered Maritimers long to come home. That, at least, is the mythology.

But the book is at its best when not just waxing on about the old white men of yore. It comes most alive when DeMont peppers his narrative with less-familiar, less-heroic figures such as the late Mi’kmaq leader Donald Marshall, Jr., who was convicted of a murder he didn’t commit, or boxer Sam Langford. One of the best stories in the book is that of Bessie Hall, the daughter of a sea captain whose father fell ill onboard ship, leaving Bessie the first to commandeer a transatlantic vessel entirely on dead reckoning. DeMont also traces the link between Acadian rabble-rouser Joseph Brossard (Beausoleil) and his descendants – the Knowles sisters, Beyoncé and Solange.

While DeMont isn’t exactly conciliatory toward questionable colonial figures such as Cornwallis, they do make up the bulk of this narrative. Mi’kmaq, Black loyalists, and women are treated respectfully, but remain minor, supporting characters. I imagine DeMont would point out that, in terms of numbers, this is what they often were.  Still, if he aims to highlight the worker as the heart of Nova Scotian history, it would be wise to include a greater focus on some of the unsung labour (children, women, people of colour) that helped make the province what it is today.