The Longbow, the Schooner and the Violin: Wood and Human Achievement 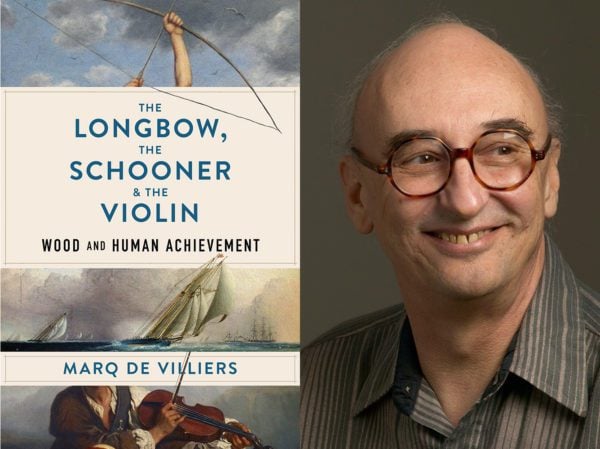 Through the vision of journalist and author Marq de Villiers, you can see the forest for the trees. The natural history of forests and the complex interrelationship between humanity, trees, and wood are the focus of his latest book, The Longbow, the Schooner and the Violin: Wood and Human Achievement. A blend of natural science and cultural anthropology, the book ultimately focuses more on nature than on human ingenuity.

De Villiers is the author of 14 books and the recipient of the Governor General’s Literary Award for his 1999 title Water: The Fate of Our Most Precious Resource. In his latest outing, he asserts that some of humanity’s greatest accomplishments – namely, the titular longbow, schooner, and violin – have involved harnessing the utility of wood. These European creations are chosen by the author to represent “the pinnacle of their craft” across human societies.

Each of the three inventions is the subject of a detailed essay. In a well-researched and highly comprehensive manner, the longbow, schooner, and violin are set in their social and historical contexts; the author even includes very detailed explanations of how each object is constructed. In the process, de Villiers borrows from some of his earlier works, including Into Africa and Witch in the Wind, the latter of which is about the Canadian schooner Bluenose.

But the balance of the book is a broader appreciation of trees and forests. Subjects covered include the evolution of trees since ancient times, if and how trees communicate with one another, the ways insects and fungi interact with forests, and contemporary questions such as the role of forest fires and the impact of climate change. The narrative includes some of de Villiers’s own adventures to forests around the world, as well as sweeping cultural references. The author is extremely thorough in his approach; it’s very likely that, after reading this book, any questions the general reader may have had about trees will be answered, and then some.

De Villiers’s commitment to comprehensiveness can sometimes work against readability. There is a tendency to resort to long lists in cases where an abbreviated approach would be more engaging. For instance, when discussing how the forest is prominent in human rituals, a single paragraph mentions those of Ghana, New Zealand, China, western Nigeria, ancient Greece, Japan, and Scotland. The chapter “Trees, root and branch” lists every single part of a tree and its function. There is an entire chapter called “Wood and its uses” that is exactly what it sounds like: simply a list of uses for wood and which types of wood best serve each purpose. “Best wood for fine furniture” gets its own chapter; de Villiers visits a professional cabinetmaker and recounts the different types of wood that he stockpiles by name – all 32 of them.

The Longbow, the Schooner and the Violin is a curious amalgam. It feels mistitled given that the discussion of the inventions forms such a small part of the overall whole. It’s really two books in one – the first about human invention, and a second about forests and their role on the planet. The latter feels more fully realized than the former. While the reader may question whether all these essays belong together, from a research perspective, the book is an impressive accomplishment.